Digital Democracy Room – #observa2018 - is an initiative by FGV’s Department of Public Policy Analysis (DAPP), to provide public and accessible daily analyses on discussions regarding public policies, electoral themes and actions to manipulate the political process, such as automated profiles (bots) and fake new

Monitoring public debate and the impact of disinformation practices on social media during the 2018 elections. That is the proposal of the recently launched Digital Democracy Room – #observa2018. An initiative by FGV’s Department of Public Policy Analysis (DAPP), the new platform aims to provide public and accessible daily analyses on discussions regarding public policies, electoral themes and actions to manipulate the political process, such as automated profiles (bots) and fake news.

Go to the website to check out the Digital Democracy Room 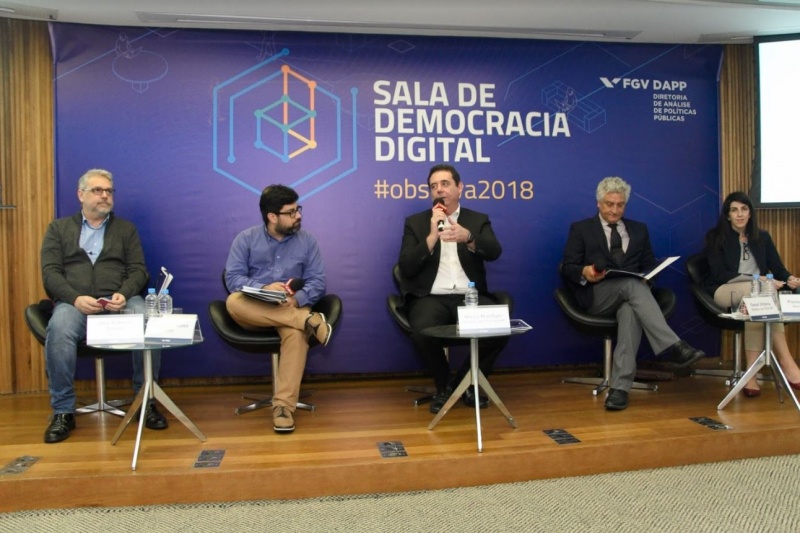 — The Digital Democracy Room will present a weekly consolidation report and a mobile web app, featuring new information and updates on the social media debate every morning. The whole world is discussing this topic and trying to understand the influence of social media on voters’ decisions; how this changes the public agenda; and its general influence on politics — said Marco Aurélio Ruediger, DAPP Director.

The platform was launched on July 25 during a seminar that brought together experts to discuss the impact of social media on the elections in Brazil and around the world. During the opening lecture, DAPP researcher Amaro Grassi pointed out that the Digital Democracy Room is the result of different projects and efforts made over the past few years.

— The idea of the Digital Democracy Room – #observa2018 is to have a real impact on the Brazilian public agenda – in other words, to monitor the electoral and political debate; what Brazilians are saying about candidates and the public agenda; what are the critical issues for the future of Brazil; and, of course, focused on the global phenomenon of misinformation, bots, fake news, and how they can negatively impact Brazil’s democratic process. The Room was conceived to address this moment in Brazilian history from an interdisciplinary perspective, bringing together all of our partners in a joint effort to qualify the public debate that we will see in the coming months — said the researcher during the event’s opening session.

The Room also has media partnerships with CBN radio, newspaper O Estado de S.Paulo, fact-checking agency Lupa, digital portal Nexo Jornal; and Elo Company, in addition to an Observer Committee formed by an international network of academic, civil society and government partners, which will constantly interact with DAPP researchers in the Room to share experiences during the election period.