After attack, debate that criticizes Bolsonaro is predominant

The discussion about the veracity of the incident involving the attack against Jair Bolsonaro, which was the main subject of tweets last Thursday (6), has been replaced, since Friday (7), by other questions. This group, in orange, is still hegemonic (53.9%). But, besides the speculation about the stabbing being fake, it highlighted now hate speech, the intensification of violence in the electoral process, Bolsonaro’s and his family’s combative attitude and the series of “tragedies”, like the one involving the National Museum, in the Brazilian scenario. 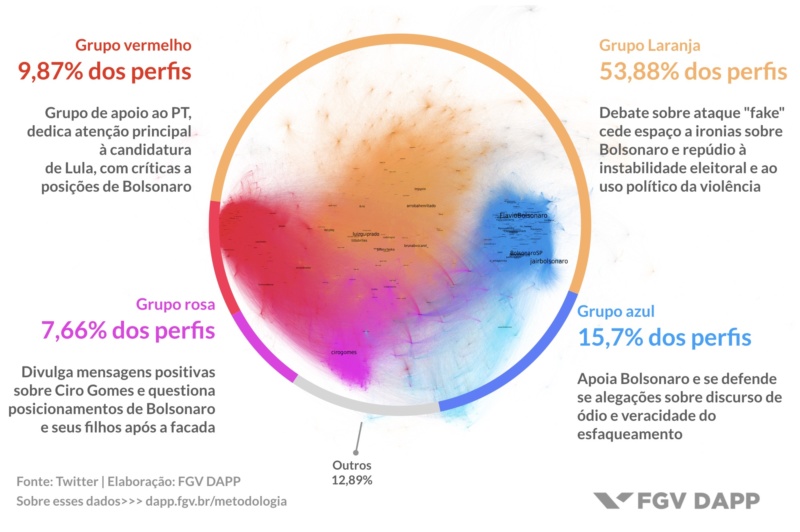 Red (9,87%): group that supports PT, gives special attention to Lula’s candidacy, with criticism of Bolsonaro.
Pink (7,66%): Publishes positive messages about Ciro Gomes and questions Bolsonaro’s and his children’s positions after the stab.
Orange (53,88%): Debate about the stab being fake is replaced by ironies about Bolsonaro and disapproval of the electoral instability and the political use of violence.
Blue (15,7%): Supports Bolsonaro and stands for the statements about hate speech and the veracity of the stab.

The attack against Bolsonaro represented expressive change in the debate about the presidential candidates, mainly affecting Geraldo Alckmin. The PSDB candidate already presented a continuous participation growth on Twitter at the beginning of the month, engaged with the TV campaign that criticizes Bolsonaro and the antagonism towards Temer’s government.