Still the poll leaders, both candidates had a higher average of interactions per post in the previous month; Haddad saw an increase after his indication for vice

The leaders of the electoral race in the last opinion polls, Jair Bolsonaro and Lula, continue to fight tooth and nail to attract followers for their official Facebook pages. From July 7 to August 6, both were virtually tied in terms of engagement rates, maintaining a significant lead over the other actors of the presidential race.

Engagement average (interactions/post) of the pre-candidates
Jul, 7 – Ago,6 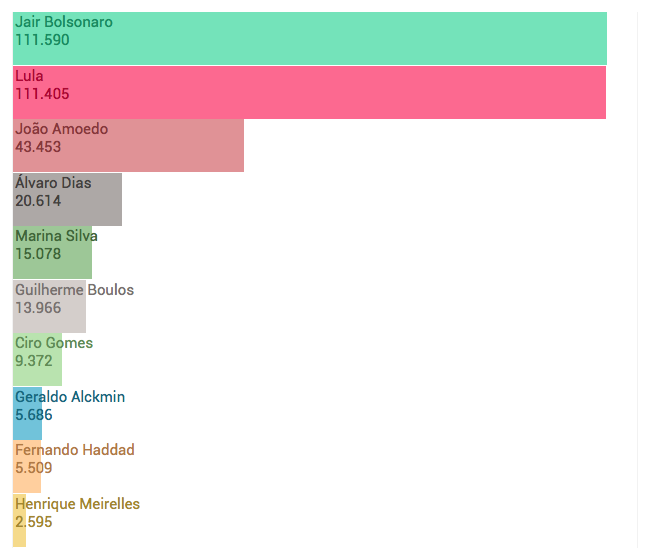 In this period, Bolsonaro had an average of 111,590 interactions per post, while Lula received 111,405 interactions on average for each publication he made. In third came Amoêdo, with 43,453. Manuela D’Ávilla, who had just withdrawn her own candidacy this weekend in order to integrate the PT ticket for the elections, had 35,100 interactions.

Considering these four names, the left wing showed a much more active behavior on the social network: Lula made 304 publications over the month, while Manuela – who was then the candidate with the most continuous actions on Facebook – made 467 (senator Álvaro Dias made 461 in the same period); on the other hand, Bolsonaro made 112 publications, and Amoêdo made 231.

The imbroglio involving the decision by on-call appellate judge Rogério Favreto (TRF-4), who granted a habeas corpus plea to Lula, was the event in July with the most repercussion among the pre-candidates.