Corruption and economy are highlighted in the electoral debate

Corruption tweets are predominant when associated with Lula, Bolsonaro, Alckmin and Ciro

The dispute over political alliances comprised the two main themes on Twitter relating to the presidential hopefuls between July 23 and July 29. In this scenario, the formalization of the Centrão’s support to Geraldo Alckmin (PSDB) was highlighted, mobilizing significant repercussions in posts related to corruption and economy. 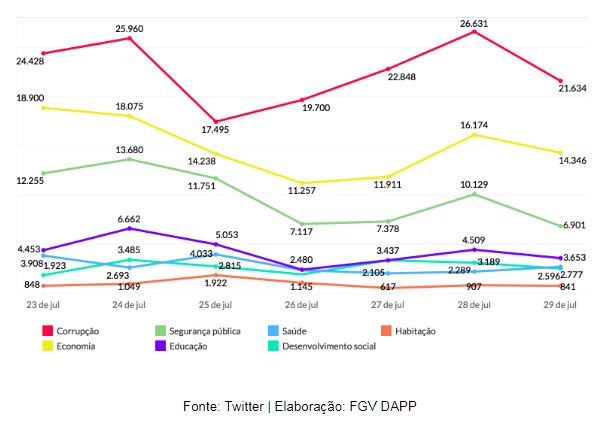 Among the themes monitored, corruption is prevalent when associated with former president Lula (PT), with 65,575 mentions, Geraldo Alckmin (PSDB), with 36,624 mentions, Jair Bolsonaro (PSL), with 34,902 mentions, and Ciro Gomes (PDT), with 8,900 mentions. In this case, the approach between PSDB’s candidate and the Centrão resulted in posts that associate him with the establishment and to parties and politicians involved in recent scandals.

Mentions to Lula on this topic interweave with mentions to Ciro, due to talks by PT’s candidate about the possibility of containment of legalization of politics, which could lead to Lula’s release in case Ciro was elected. Facebook’s new parameters on removing pages due to the dissemination of fake news also reflected in mentions to PT’s candidate. Users questioned that the narrative about Lula being a political prisoner would be “fake news”, and the articles that disclose such lines should be deleted.

Bolsonaro, the second biggest name associated with the topic on Twitter, has emerged as the main opposition to corruption and to the possibility of return of PT to the country’s administration. The main tweets also talk about the candidate’s absence of alliance as a positive factor.

Tweets that associate economy with Bolsonaro (26,318) highlight supporters’ questions on the fact that the deputy is criticized for affirming not to have any knowledge about economy, presenting his proposals for the interests “of the man of the field and the city” in a speech in Rio Verde (GO) and his support to the privatization of state-owned enterprises — part of his economic program.

Lula, in turn, appears related to the topic in 24,153 mentions. The main retweets show a critique to “Festival Lula Livre” (Free Lula Festival) last Saturday (28) by the presidential hopeful João Amoedo (Novo), and an article from PT’s presidential hopeful published last Friday (27), announcing his proposals for the resumption of the country’s economic growth. The name of Geraldo Alckmin appears in 12,022 tweets about the topic. The alliance between PSDB’s candidate and the Centrão becomes relevant again, especially regarding a certain uncertainty about his economic program after the alliance.

Public security was the third issue most related to presidential hopefuls in the period analyzed, especially in Bolsonaro’s agenda — actor who usually centers the discussion concerning this topic. There were more than 41,000 tweets involving Bolsonaro, among which the presidential hopeful himself announced his concern with “honest people” and talked to soldiers. The second name that appears most in this theme is Geraldo Alckmin, with 5,743 mentions, mainly criticizing PSDB’s administration and the strength of organized crime in the state of São Paulo.