Between Tuesday (11) and Sunday (14), the debate about the presidential elections on Twitter prompted 6.18 million mentions – 4.76 million about Jair Bolsonaro and 2.18 million about Fernando Haddad. Following a trend of decrease, the daily mentions to the candidates tell very similar stories, pointing to a natural association between them, in a more polarized scenario in the second round. The most retweeted post in the period regarding the PT candidate – and the third most retweeted regarding the PSL candidate – makes ironic remarks about the attacks exchanged between the two on the network. The tweet and its variations were shared 41.8 thousand times.

Evolution of mentions to the presidential candidates
Oct 11 – Oct 14 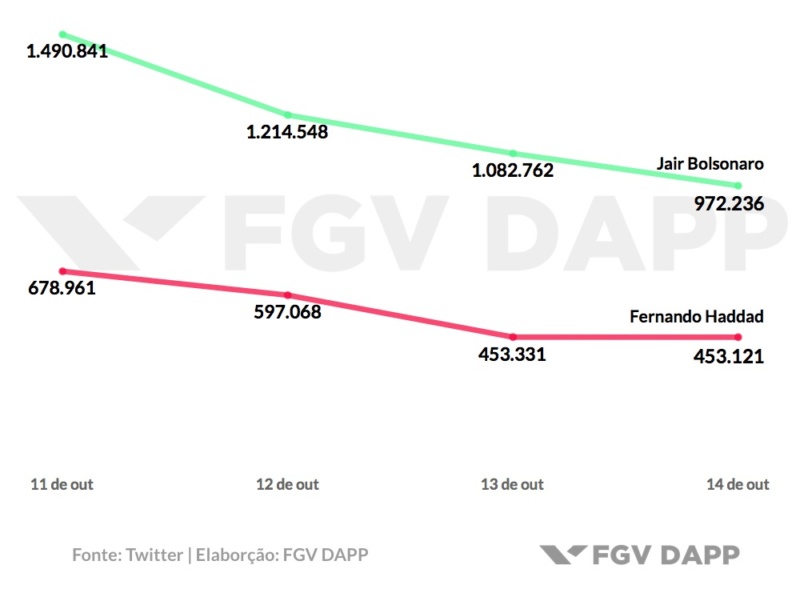 The most shared tweets about Bolsonaro involve attacks to him, with repercussion of statements considered controversial – such as a video in which he supposedly admitted to being homophobic –, as well as criticism of the possibility that he will not participate in the debates – against which Bolsonaro defends himself by stating that he is still recovering his health.

The profiles of Haddad and Bolsonaro have an indirect discussion and attack each other. Haddad is against what Bolsonaro states about the “gay kit”, stating that it is one more of his lies, and that he would be absent from the debates to avoid confrontation. Haddad also states that he is an honest and democratic candidate.