The first presidential debate ahead of Brazil’s general election, due to occur next October, was held last Thursday (10). An analysis of online engagement in the evening of the debate found low presence of automated profiles (some 3% from total interactions) and low impact of information mentioned by candidates and classified as “fake” by fact checking agency Lupa – a partner of FGV DAPP’s Digital Democracy Room.

However, for the first time since the pre-campaign started, one piece reporting on non-authentic information appeared among the ten most engaging articles on social media. The piece, published by República de Curitiba website, claimed Twitter “removed” mentions to right-wing candidate Jair Bolsonaro from the platform during the debate.

Bolsonaro, a former military officer with a strong social media presence, is second in the polls, behind former left-wing president Luiz Inácio Lula da Silva. The right-wing candidate will probably become the front-runner, since it is likely that Lula’s candidacy will be barred by the electoral court. Lula, the leader of PT, was imprisoned last April, accused of involvement in the corruption scandal revealed by the Lava Jato (Car Wash) probe, which also implicated many other politicians, from both sides of the political spectrum. The corruption scandal compounds an economic crisis, and thus upended Brazil’s political system.

Thirteen candidates will run for President in the general election, which will also renovate Congress and elect state governors. However, according to Brazil’s electoral rules, only nine candidates were invited to the TV debate. Since Lula was not allowed to go, eight candidates participated of the debate.

The interaction map was created from a collection of 1.070 million tweets and 643 thousand retweets related to the names of candidates during the debate, which gave origin to six clusters. The central node of the network, which clustered 35.2% of the profiles participating on the discussion, was the making jokes and ironic comments about the candidates’ performance, especially related to Bolsonaro and the evangelical candidate Cabo Daciolo. The node that supports Bolsonaro is concentrated in the blue group (19.2% of total profiles), whilst left-wing profiles and former president Lula supporters are in the red group, with 8.8% of the profiles.

The purple group, right-wing leaning, made up 13.1% of profiles and concentrates anti-Bolsonaro accounts, former Sao Paulo state governor Geraldo Alckmin supporters, influencers and people who wanted another right-wing candidate, João Amoedo, to be part of the debate. In light pink (17%) and orange (3.6%) are two groups linked to the left, yet not part of the group which interacts directly with PT supporters. The light pink group opposes Bolsonaro, but does not show support for any specific candidate; the orange group is formed by left-wing Ciro Gomes supporters, who generated mainly positive references in the debate.

Some 3% of interactions which were influenced by automated profiles, known as bots. This percentage can be described as low when compared to other recent moments of the Brazilian political debate. For instance, when FGV analysed the level of bot influence in the debate in July, it discovered up to 22% of interactions were motivated by bots. Both analyses were made using the same methodology, developed by FGV DAPP and available here.

Some 3% of interactions which were influenced by automated profiles, known as bots. This percentage can be described as low when compared to other recent moments of the Brazilian political debate. For instance, when FGV analysed the level of bot influence in the debate in July, it discovered up to 22% of interactions were motivated by bots. Both analyses were made using the same methodology, developed by FGV DAPP and available here.

Fact-checking agency Agência Lupa identified eight pieces of information mentioned by candidates during the TV debate which were labeled as “fake”. When analyzing the impact of this information, FGV DAPP found that two topics investigated by Lupa mobilized users on Twitter: the gun control debate, connected to Bolsonaro, and printed voting, related to Cabo Daciolo. Nonetheless, in general, users discussed the themes, without using the wrong data mentioned by the candidates as arguments. One exception, however, happened when Ciro Gomes wrongly said that the wife of judge Sergio Moro – one of the leading names in the Car Wash probe – received housing allowance. Gomes corrected the information during the debate, and among the tweets with more repercussion about this topic is mentioning the candidate’s apology.

The discussion regarding green candidate Marina Silva and public sanitation, for instance, revolved more around complaints of how much she spoke about the topic than the fact that she used wrong data about the number of households with inadequate access toinfrastructure. Former Central Bank president Henrique Meirelles statement about Venezuelan migrants received engagement due to his position against closing the borders. There were also critics about the Venezuelan regime.

Social media users also discussed Cabo Daciolo statement that Ciro Gomes integrated international left-wing groups such as Foro de São Paulo and the Ursal (acronym for the Latin American Soviet Union of Socialist Republics, which is a fictitious group), which was mentioned 80.4 thousand times. Among the tweets that had more repercussion was humorist Danilo Gentili’s criticism of the potentially controversial behaviour of the candidate (4.3 thousand retweets). Jokes and ironies also spread. However, some people took Daciolo’s comment seriously, such as profiles which mentioned Ursal, which engaged in some 6 thousand interactions.

FGV DAPP’s analyses identified, for the first time since the beginning of the pre-campaign, the presence of an article which was labeled as “fake” by fact-checking agency Lupa among the top-stories related to the debate, according to the number of engagements on Facebook and Twitter (between Thursday 12pm and Friday at 12pm). The piece published by República de Curitiba website claimed Twitter had removed mentions to Bolsonaro on the platform. The claim that Twitter had removed hashtags related to the candidate, which made them disappear from the Trending Topic list, also echoed on the social platform, though not originating from the mentioned link. More than 32 thousand references were made to the subject. The most retweeted publication was from Bolsonaro’s profile, with more than 7.7 thousand retweets. 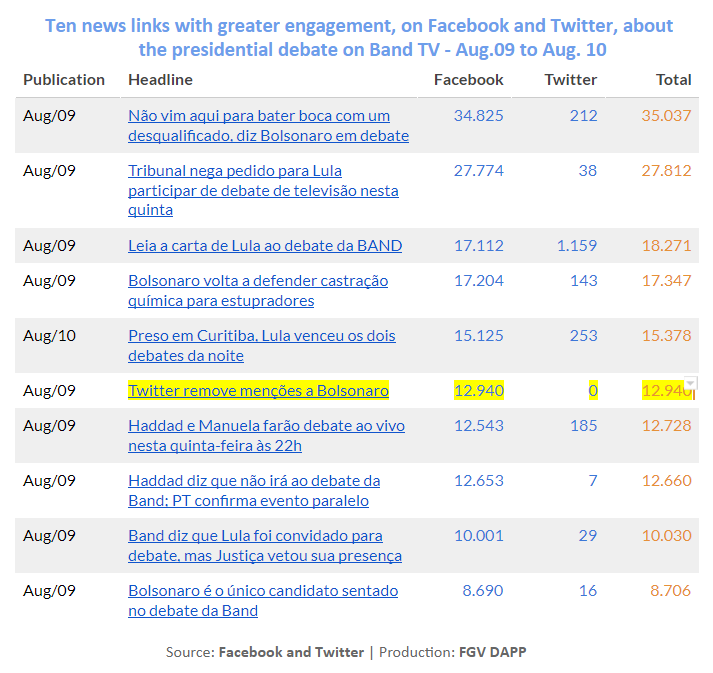 In all, the TV debate generated 1.59 million Twitter publications about the candidates between Thursday 10pm and Friday 1am. The hashtag #DebateBand entered the world’s Trending Topics list. The most popular hashtags were #debateband (572 thousand mentions), #bolsonaronaband (209 thousand) and #estoucombolsonaro (177 thousand). The most engaging topics, besides irony, jokes and comments about candidates’ attitudes, were themes such as corruption, economics and security.