Although absent, Bolsonaro was mentioned 563.3 thousand times on Twitter between Wednesday at 10 p.m. and Friday at 1 a.m.; Boulos’ statement about the military dictatorship prompted the highest peak of mentions at 10:30 p.m., with 17.7 tweets per minute

The last presidential debate before the first round of the elections at TV Globo saw the absence of Jair Bolsonaro become very relevant on the social networks. Bolsonaro – who granted an interview to TV Record at the same time of the debate – was the presidential hopeful with the most mentions on Twitter during the broadcast of the event, accumulating 563.3 thousand mentions between Wednesday, October 4, at 10 p.m., and Friday, October 5, at 1 a.m., either due to the impact of his interview or due to the debate associated with his opponents. He was far ahead of Ciro Gomes, who registered 455.9 thousand tweets and became the second most mentioned candidate. In total, in this period, we registered 1.64 million references to the seven participants on the social network, as well as Bolsonaro.

Volume of mentions to the presidential hopefuls on Twitter 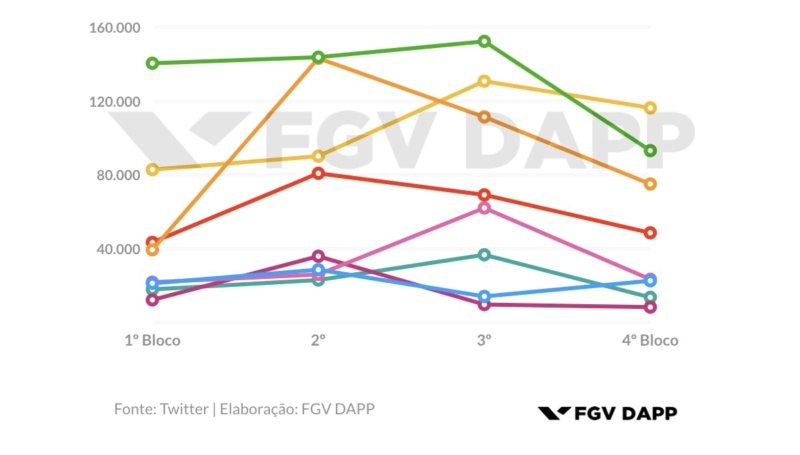 Fernando Haddad, who is in second place in the opinion polls, was mentioned 266.5 thousand times, behind Guilherme Boulos, whose comment about the military dictatorship represented the peak of political discussion on Twitter: Boulos had 402.1 thousand mentions throughout the debate and, around 10:30 p.m., was responsible for the peak of references to the presidential hopefuls, with an average of 17.7 thousand tweets per minute. In comparison, during the presidential debate at TV Globo in 2014, which happened on October 2, there were 1.08 million tweets in the same period about the participants at the time – therefore, there was an increase of 52% in four years.

The other participants this year were Marina Silva (143.3 thousand tweets), Geraldo Alckmin (91 thousand), Henrique Meirelles (98.7 thousand) and Alvaro Dias (74 thousand). The two initial hours of the confrontation between the candidates coincided with Bolsonaro’s interview (which started at 10 p.m.); the political discussion was more intense on the social network during that time, with 1.23 million mentions registered. Towards the end, there was a sharp drop in the volume of interactions among the profiles on Twitter, with Ciro surpassing Bolsonaro as the highlighted candidate between 0:01 a.m. and 1 a.m. this Friday. The Globo broadcast ended at around 0:45 a.m., and there were 660 thousand tweets during the transmission of the debate with the hashtag #debatenaglobo (Debate at Globo), with or without referencing the presidential hopefuls.

Evolution of mentions to the political actors on Twitter 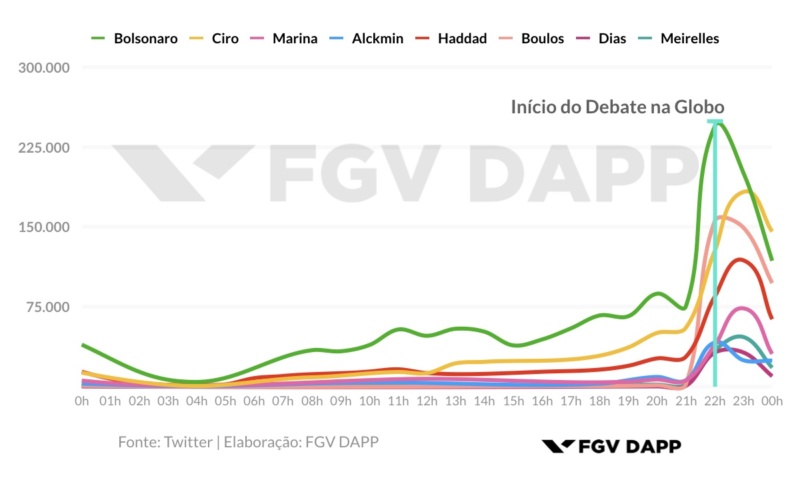 In a debate with low specific impact of public policy topics or agendas, despite the themes that were part of the questions in the event, the search for space between the two extremes that appear to be the favorites for the second round, Haddad and Bolsonaro, set the tone for the discussions between the presidential hopefuls and on the networks, beyond jokes and sarcasm about the candidates and the political scenario. However, economic issues were more emphasized than other topics, with a predominance of associations with Haddad, who brought up acts carried out by the PT administrations and discussed issues focusing on fighting inequality and on labor rights, and with Bolsonaro, who was criticized by his adversaries due to declarations he has given about the theme and for the positions of his VP candidate, general Hamilton Mourão, and of economist Paulo Guedes.

Volume of mentions to the themes associated with the debate 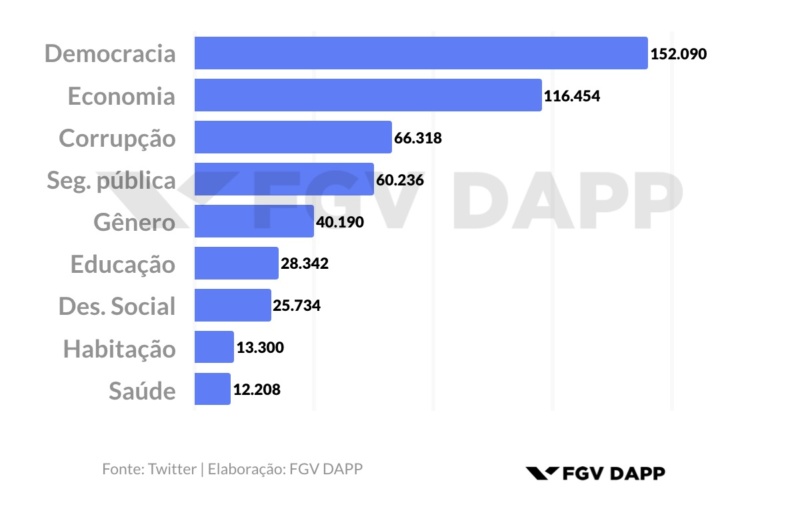 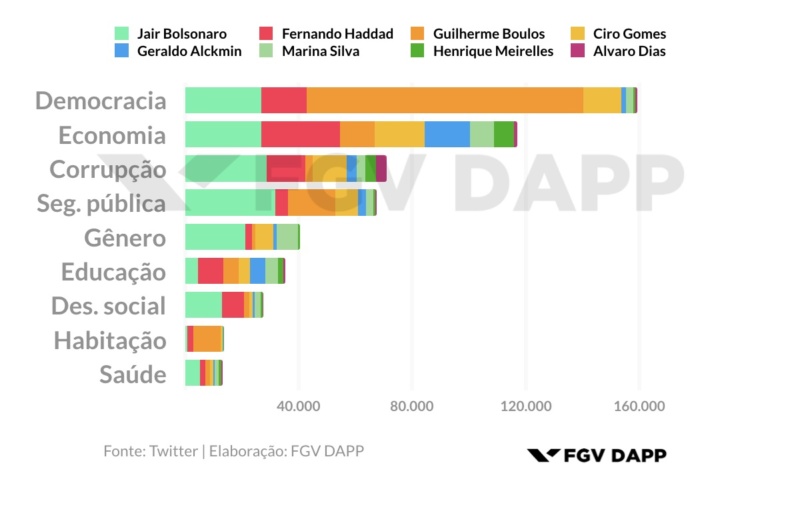