Decision on abortion in Argentina mobilizes 24,000 posts in Brazil

We highlighted comments favorable to the decision: among the ten most retweeted tweets, seven celebrated the legalization and three reported the fact

In Brazil, 24,300 tweets were published from 4:00 pm this Wednesday (13) to 4:00 pm on Thursday, as a result of the debate and the approval of a law decriminalizing abortion up to the 14th week of pregnancy by Argentina’s House of Representatives. Among the ten most retweeted tweets, seven celebrated the legalization and three reported the fact; therefore, favorable comments on the decision stood out by a large margin. The most retweeted tweet in the past 24 hours quote a  statement of one Argentine deputy during the session. 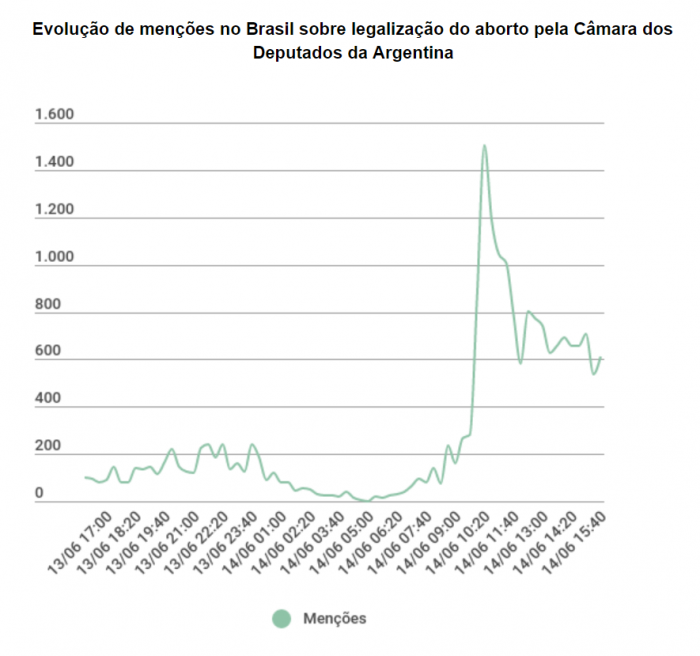 The most used emoji was of a green heart (?), as it is the color adopted by the pro-abortion movement, in 540 tweets. The emoji of the high voltage signal (⚡) comes right after, in 380 tweets, usually used for breaking news; and the biceps emoji (?) in 130 tweets, a symbol associated with the feminist fight in this case.

Among the most active hashtags are #abortolegalya, with 3,300 posts; #abortoseraley with 1,600; and, #13j and #abortosesionhistorica, both with 580.

In the regional distribution of tweets, the state of São Paulo (6,500) leads with absolute figures, followed by Rio de Janeiro (4,300) and Rio Grande do Sul (2,700). Weighted by the number of users per region, Piaui, Sergipe and Ceara stand out.