We registered 2.1 million tweets about the candidates in 24h, and Bolsonaro remains the leader in references, with 1.4 million mentions

As the second round approaches, speculation about the election result dominate the debate about the presidential hopefuls on Twitter. We registered 2.1 million mentions to the elections from Thursday (25) at 2 p.m. to this Friday (26) at 2 p.m. Bolsonaro appeared in 1.4 million publications – maintaining his average from the previous 24 hours –, while Haddad was mentioned in 1.1 million tweets, an increase of 17% in the volume of posts. We highlight the clash between optimistic messages sent by supporters of the former minister, who see some hope of turning the result in their favor based on recent polls, and publications by electors of the congressman, who said that this was a result of a pro-Haddad strategy associated with a narrative previously seen in the first round that there will be election fraud next Sunday. 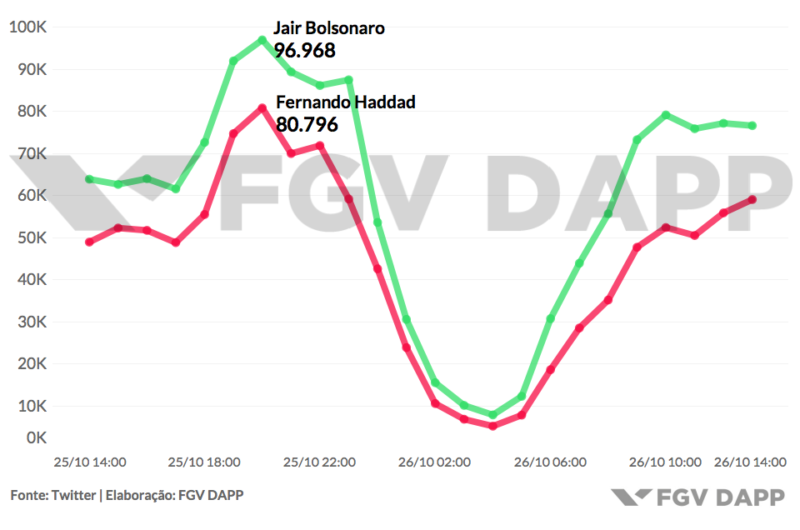 The decrease of the difference between the candidates in recent voting intention polls and the decrease in the rejection of the PT candidate appeared as the most retweeted publications about Bolsonaro in the 24 hours analyzed. Supporters of the PSL candidate have been showing concern with the possibility of fraud in the elections and mistrust regarding the polls – some of the most frequent hashtags in the debate deal with this narrative, such as #nemvemquenaotempt (“No, you don’t, PT”, 3,3%) #nãoaceitaremosfraude (“We don’t accept fraud”, 3%), #cagueiprodatafolha (“I don’t care about Datafolha”, 0,6%) e #cagueirproibope (“I don’t care about Ibope”, 0,4%). At the same time, Bolsonaro’s performance at the Northeast region was celebrate with the most mobilized hashtag in the tweets: #nordesteé17 (“The Northeast votes 17”, 5,5%).