Group with the most profiles in the map of interactions criticizes Bolsonaro and discusses who has the best chance of defeating him, Ciro or Haddad; Women against Bolsonaro propel hashtags such as #elenão (not him) to demonstrate their opposition to the candidate

In the aftermath of the presidential debate about the attack against Jair Bolsonaro on September 6, two other themes gained projection on Twitter since Friday (14): the discussions around the so-called useful vote and, also related to that, women’s votes. The creation (and, later, the invasion) of a Facebook page of women against Bolsonaro during the weekend propelled the use of hashtags such as #elenão, used to demonstrate opposition to the candidate, but also by supporters who reacted in defense of the PSL candidate.

This debate expanded a discussion that was already growing on the network, as new voting intention polls are released and users discuss which candidate would be the strongest to face Bolsonaro in a second round.

Map of interactions without bots about the presidential hopefuls
2.5 million retweets | Sep 14 – Sep 16 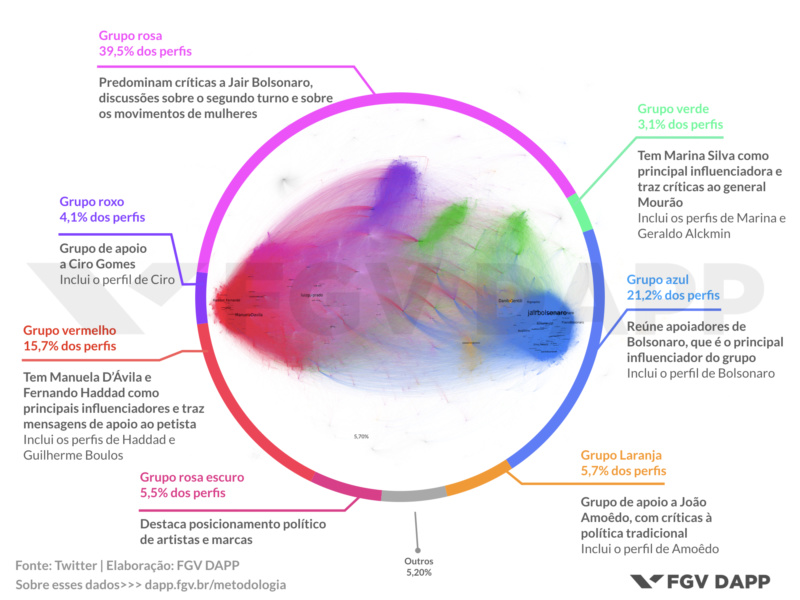 Pink: a predominance of criticism of Jair Bolsonaro, discussions about the second round and about women’s movements.

Red: has Manuela D’Ávila and Fernando Haddad as the main influencers and posts messages supporting the PT candidate

Dark pink: Highlights the political position of artists and brands

Green: Has Marina Silva as the main influencer and posts criticism of general Mourão.

Blue: Garners supporters of Bolsonaro, who is the main influencer in the group.