After the support provided by the Northeastern region of Brazil ensured Fernando Haddad’s spot on the second round against Jair Bolsonaro, the northeastern population, who were victims of internet attacks during the 2014 elections, were the target of attacks with messages of prejudice and threats on the social networks. Since Sunday at 7 p.m., when the first partial result of the elections was released, we started to register criticism against voters from the Northeast region, with offenses associated with poverty, with the impact of the Bolsa Família program, with the northeastern people and with the amount of northeastern immigrants who live in the Southeast or South regions of Brazil. Until 10 a.m. this Tuesday, there were 1.76 million mentions to this theme, according to a data collection by FGV DAPP. 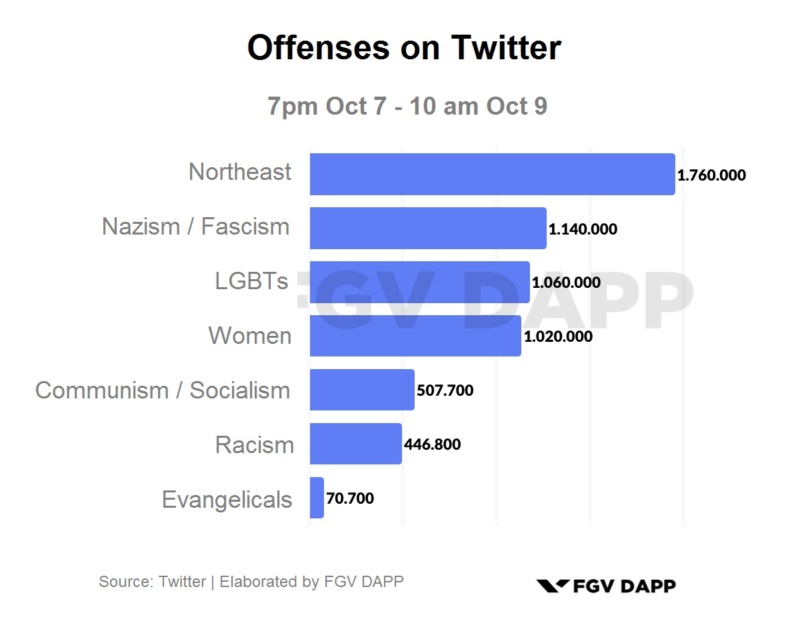 Profiles opposing and supporting Jair Bolsonaro condemned tweets offensive to the northeastern population. Pro-Bolsonaro influencers and politicians stated that attacking northeasteners creates arguments for Haddad and the PT to win the votes that the PSL candidate received in the region. On the other hand, in the largest part of the debate, groups opposed to Bolsonaro (and not necessarily pro-PT) thanked the Northeast for stopping the growth of the PSL presidential hopeful.

The peak of mentions to the northeastern population was right after the opening of the presidential vote tally, with an average of 4.5 thousand tweets per minute between 7:15 and 7:30 p.m.