#elenão (not him) movement prompts more than 1.6 million mentions for and against Bolsonaro

The fight between hashtags pro and con the presidential candidate Jair Bolsonaro, created from the repercussion of the #elenão marker, continues to prompt a significant volume of tweets. Between September 12 – the day when the first tweets appeared – and last Monday (24), there were approximately 1.6 million mentions. Among them, the most popular are the hashtags #elenão (1 million) #elenunca (never him, 390 thousand) and #elesim (283.9 thousand).

Evolution of mentions triggered by the movement – Sep 12 – Sep 24

FGV DAPP grouped the hashtags whose discourse is similar and observed their evolution. The first group includes: #elenão, #elenunca, #elejamais, #elenãoelenunca, #elemente and #nothim (and variations). Together, these hashtags prompted around 1.2 million posts, that is, 75% of the total number of tags monitored.

Initially, the hashtag #elenão appeared as a mobilization of the feminist movement that is positioned against Bolsonaro. In the most retweeted publications between September 12 and 14, for example, the highlights were the reposting of statements by the candidate considered offensive to women, and, later, to political minorities, and the promotion of the page “Women United against Bolsonaro”. The hashtag was often associated with: #mulherescontrabolsonaro (women against Bolsonaro), #mucb and #nãosomosumafraquejada (we are not the result of a moment of weakness, referring to one of Bolsonaro’s statements), among others.

Mentions to the hashtags against Bolsonaro Sep 12 – Sep 24 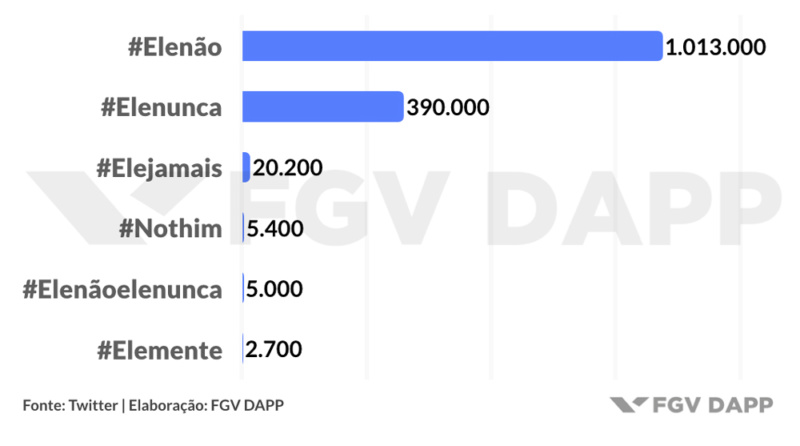 As the days went by, the hashtag and its variations were even used, in some moments, by Bolsonaro’s supporters, in expressions such as “#elenão é corrupto” (he isn’t corrupt) or “#elenão é ladrão” (he isn’t a thief).