The study refines the DAPP Methodology and applies it in four different cases: the Queermuseu exhibition, the pre-electoral debate in Paraguay, the discussions about the eight Brazilian political actors and the trial of former president Lula

The development of new techniques has enabled bots to become progressively more sophisticated and obtain increasingly humanoid characteristics, which has made their behavior more complex and their identification more difficult. To keep up with the progress of automation, FGV DAPP continuously refines its identification parameters for automated accounts with the aid of statistical methods that grant accuracy to this checking process. This is the context in which the Department launches the journal “Bots, social networks and politics in Brazil – Volume 2”.

In addition to refining the DAPP Methodology for identifying automated accounts, the study applied it in four different cases: the Queermuseu exhibition, the pre-electoral debate in Paraguay, the discussions about the eight Brazilian political actors and the trial of former president Lula We observed a significant presence of bots in all these cases.

With better resources for this identification, it is possible to more precisely and accurately recognize patterns, dispersion groups and replication characteristics in network contents. In summary, it becomes easier to find them, even though they hide very well. And it becomes equally easier to make use of tools that help protect the democratic debate on the internet.

The applied studies evidence the challenge faced by responsible entities to care for the fairness of the electoral process in order to protect its transparency and favor its accountability.

Since the publication of the first study on the theme, “Bots, Social Networks and Politics in Brazil – Volume 1”, in August, 2017, we have identified a significant presence of bots illegitimately interfering with the public debate in at least four moments: (1) the controversy involving the Queermuseu exhibition in Porto Alegre; (2) the pre-electoral debate in Paraguay in anticipation of the elections in April, this year; (3) the discussions about the eight Brazilian political actors in a pre-electoral context in the end of 2017; and (4) the trial of former president Lula in the Regional Federal Appellate Court of the 4th Circuit (TRF-4), which happened in the end of January, 2018.

The data collection carried out by FGV DAPP about the cancellation of the exhibition “Queermuseu – cartografias da diferença na arte da brasileira” (Queermuseu – cartography of the difference in Brazilian art) in Porto Alegre gathered 778 thousand posts on Twitter between 00:01 a.m. on September 8 and midday on September 15, 2017. The map of interactions generated from this database indicates the two opposing groups in the debate: in blue, those against the exhibition; in red, those defending that it should continue. 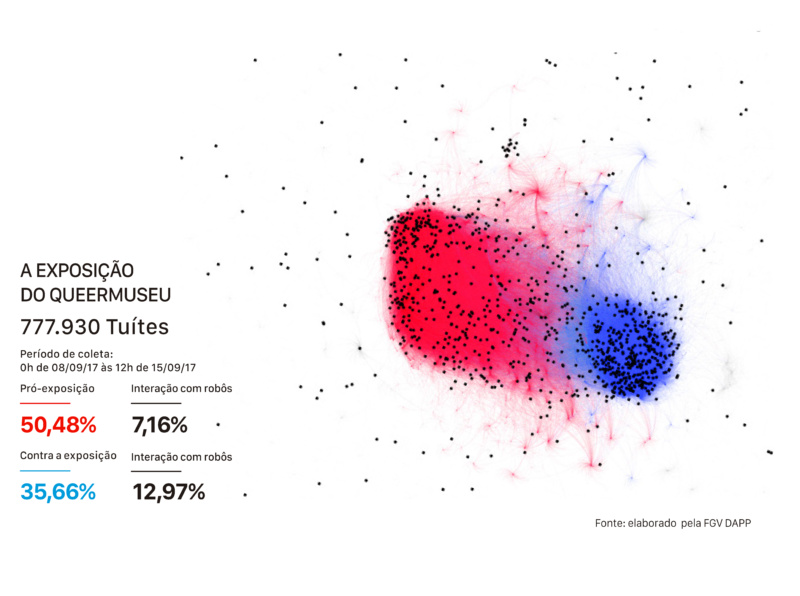 The pre-electoral debate in Paraguay

FGV DAPP mapped the debate about the Paraguayan electoral preview on Twitter between November 1st and 30, 2017, in order to identify bots in these discussions.  We analyzed around 270 thousand tweets related to the debate and found a discrete presence of bots, especially in the debate about followers of the Partido Colorado, the party of then-president Horacio Cartes.

The graph displayed below represents the debate about the party’s primary elections and shows a clear polarization between the support groups of former minister Santiago Peña (in red, representing 15.9% of the debate), the so-called “continuista”, and Mario Abdo Benitez (in blue, with 8.85% of the discussions). The remaining accounts analyzed consist of press profiles (around 70% of the total).

The trial of former president Lula

The trial of former president Lula on January 24 by the Regional Federal Appellate Court of the 4th Circuit (TRF-4) prompted 1.21 million mentions about the subject on the Brazilian Twitter in only 24 hours. The map of interactions shows that this debate was divided into three main groups: the blue one, favoring the conviction of the former president, corresponds to around 35.4% of the accounts participating in the debate; the red one, responsible for 44.1%, is composed mostly of actors opposed to Lula’s conviction; the green one (15.3%), in turn, is formed mostly by comical profiles and tweets.

FGV DAPP identified 8% of bots in the red group and 6% in the blue group. In both sources of automated posts, there is a predominance of retweets of publications made by the main influencers from each group – and not original tweets made by bots – and by vehicles whose content production is openly partisan, but not necessarily engaged in the publication of fake news and information.

In this case study, we experimentally included a third criterion for bot identification in addition to the two ones used in the other cases. To that end, we collected the debates that happened on Twitter over a period of one month (November 18 to December 17, 2017) about eight political actors: Lula, Jair Bolsonaro, Ciro Gomes, Marina Silva, Michel Temer, João Doria, Geraldo Alckmin and Gilmar Mendes. After that, we applied the DAPP Methodology with the addition of the third criterion:

1. First criterion: we verified the use of tweet-generating platforms as described in the study “Bots, Social Networks and Politics in Brazil” (RUEDIGER, 2017a);
2. Second criterion: we observed the non-human time of the publications;
3. Third criterion: we verified the accounts that produced exactly the same tweets using the so-called correlation method through identical messages, a strong indication of account automation that also allows the verification of the botnets operating together.

We then selected the tweets created by accounts that generated at least five tweets during the analyzed period and verified the percentage of correlation between each potential pair of accounts (the proportion of identical messages made by the two accounts). The minimum of five tweets per account was used in order to avoid false positives, since the possibility of correlation is inversely proportional to the volume of tweets.  After this section, we analyzed 731,844 tweets (81.85% of the total collected). 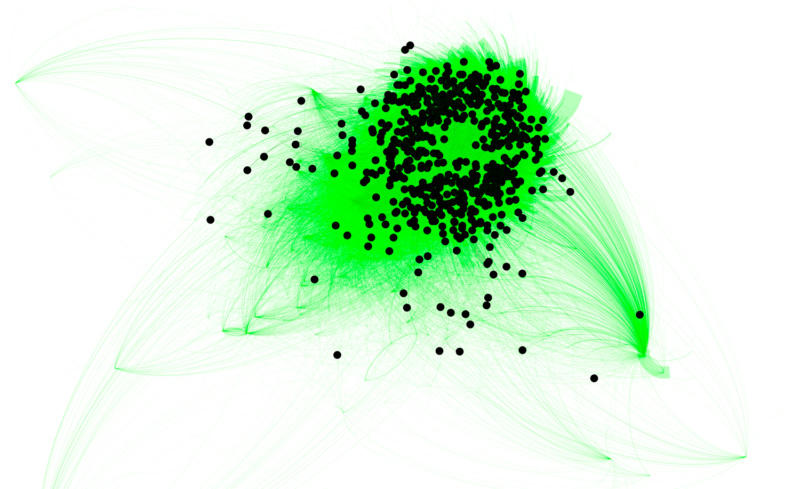 The main characteristic of the green group, with 51.96% of the total amount of accounts analyzed, is the support for deputy Jair Bolsonaro. As demonstrated by the graph, the group has a high concentration of suspect accounts: of the 101 thousand profiles in the group, 915 are suspects and were present in 33% of the interactions in the group.

Map of interactions related to Lula 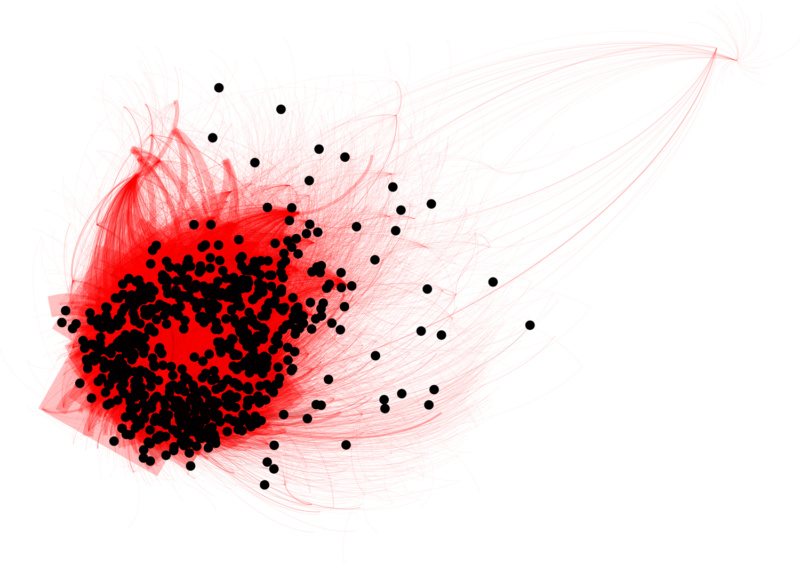 The red group, with 27.58% of the accounts present in the map of interactions, consists of profiles supporting former president Lula. Similarly to Bolsonaro’s support group, there is a high concentration of suspect accounts: 724 profiles, which were present in 27% of the interactions in this group.

The gray group, with 6.74% of the knots in this network, also supports Lula, but is mostly made up of Argentine accounts, which apparently maintain their support for former president Cristina Kirchner. This community has 36 suspect accounts, which were present in 12% of the interactions.

Map of interactions related to Ciro Gomes and Marina Silva 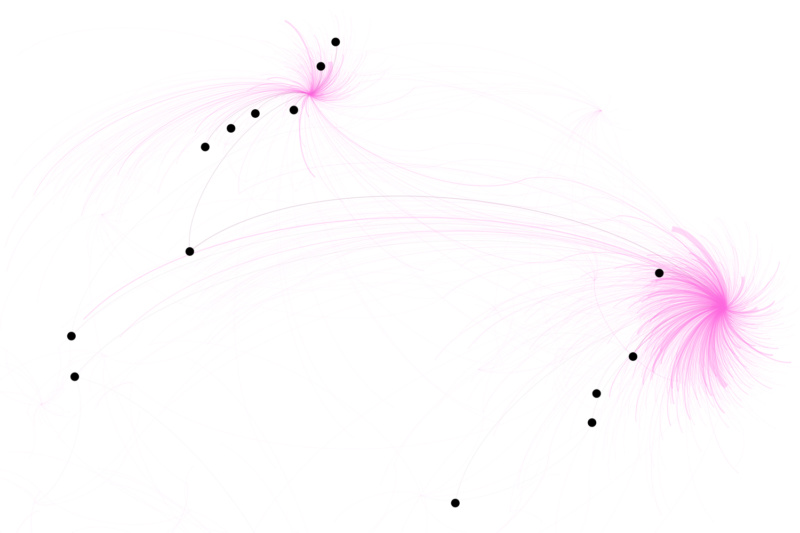 The retweets made from the official accounts of Ciro Gomes and Marina Silva formed a common group for both of them. Composed of 3.2% of the accounts in the network, the group had 26 suspect accounts, which were present in 3.5% of the interactions. 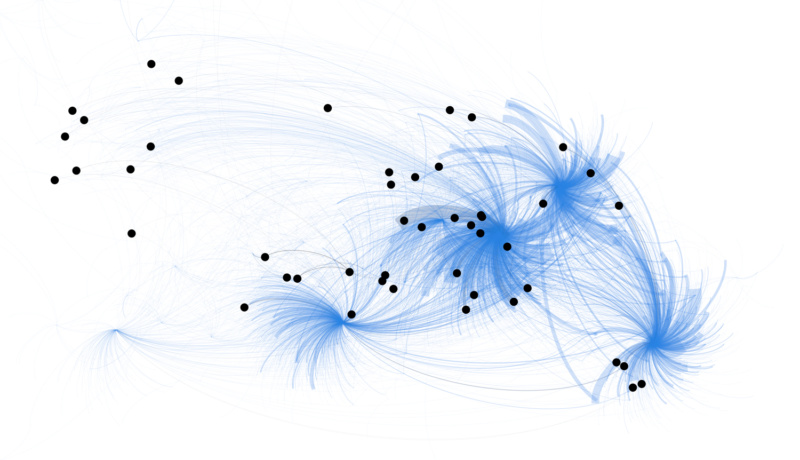 The retweets made from the accounts of Michel Temer, João Doria, Geraldo Alckmin and Gilmar Mendes formed a common group with 7.19% of the accounts present in the network analyzed. This group has 84 suspect accounts, which were present in 2% of the interactions in the community.