Jair Bolsonaro was the candidate with the highest volume, 556 thousand; Cabo Daciolo, Guilherme Boulos and Ciro Gomes came next, but at a lower level

The first debate of 2018 with the presidential hopefuls hosted by TV Bandeirantes on Thursday (09) generated 1.59 million publications on Twitter about the candidates between 10 p.m. on Thursday (09) and 1 a.m. on Friday (10) only, with the hashtag #DebateBand making it to the global trending topics. The participants were Alvaro Dias (Podemos), Cabo Daciolo (Patriota), Ciro Gomes (PDT), Henrique Meirelles (MDB), Jair Bolsonaro (PSL), Geraldo Alckmin (PSDB), Guilherme Boulos (PSOL) and Marina Silva (Rede). Former president Lula, despite not being present, was a relevant actor in the discussions due to his absence on TV.

Read more: Debate at Band had low presence of bots and fake data on networks

Volume of mentions to the presidential hopefuls

The high volume of references to the debate is a result of the hashtag promotion campaigns throughout the program. Especially Bolsonaro, who engaged mentions using the hashtags #estoucombolsonaro (I’m with Bolsonaro) @bolsonaronaband (Bolsonaro at Band) and #capitãonaband (the captain at Band) – all of them among the ten main hashtags mobilized while the debate was happening. Other actors, such as Ciro Gomes and Guilherme Boulos, also obtained good results by mobilizing posts with hashtags, as well as former president Lula, who appeared in the hashtag #debatecomlula (debate with Lula) despite his absence.

Volume of mentions to the hashtags 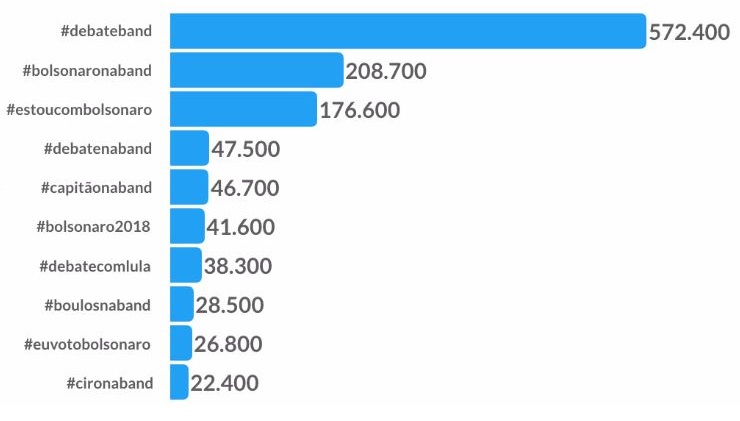 Throughout the debate (which had a low repercussion of proposals and subjects relevant to the elections, such as educations and health), we observed a predominance on networks of posts of comic nature, mentioning the first impressions of the users about the performance of the presidential hopefuls.