A group of 232 profiles has acted in other countries before and has been spreading messages involving Bolsonaro, Lula and fake news about pedophilia; A second network of automated profiles coming from Venezuela, Argentina, Cuba and Ecuador published content supporting the PT candidacy

– A group of 232 profiles, identified by FGV DAPP from misinformative content about pedophilia, made a total of 8,185 publications in Portuguese in the period between 08/01/2018 until 09/26/2018, related to Brazilian politics;

– The influencer with the most interactions in publications on the network of 232 profiles is the profile @RT_com, a Russian state television channel. Spanish language profiles owned by RT, @ActualidadRT and @SputnikInt, a Russian news channel, also appeared with a high number of mentions;

– Out of the 232 profiles, 99 released their location data, which could be used to view the distribution of their tweets in the world according to the following image:

Among the last 400 publications by these 232 profiles, we identified tweets in more than 40 distinct languages. The ones used the most were English, Spanish and Italian. Portuguese appeared in the sixth position; the tweets in Russian represented almost 3% of the base and were made by 54 profiles;

– The messages in these last 400 publications included the presence of the Italian vice prime minister, political leaders of the United States and youtuber Paul Joseph Watson – who is associated with the alt-right -, as well as Russian portals RT, RT en Español and Sputnik;

– Some of these profiles have acted in other electoral debates, such as the in the USA elections (in which we found 87 accounts), in France (55 accounts) and in Germany (98 accounts). In the debate about the exit of the United Kindgom from the European Union (Brexit), there were 66 accounts. We also found their participation in debates in Argentina, Paraguai and Mexico. 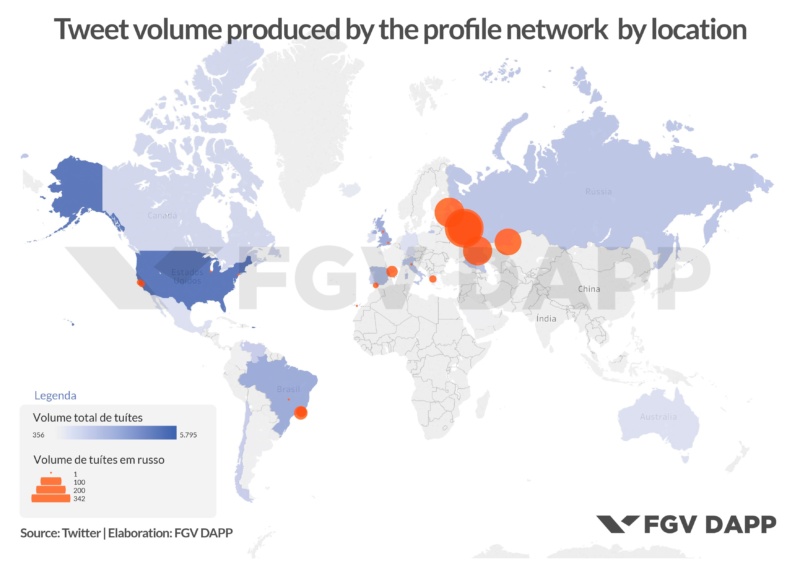 The bots we identified complemented our previous data collection, with a database from October to December, 2017, in which we also identified mentions made by accounts from Argentina, Venezuela and Ecuador in interactions with the official profiles of Brazilian political actors and actors associated with parties and political figures, aligned with the left wing in these countries;

– Out of the 732 automated profiles in the 2017 database, 102 accounts were tagged as having mentioned South American political actors.

– The list of relationships between each group of bots and political actors can be found below. To help visualize the degree of proximity to political actors, we highlighted only the groups of automated profiles that mentioned more than one politician. 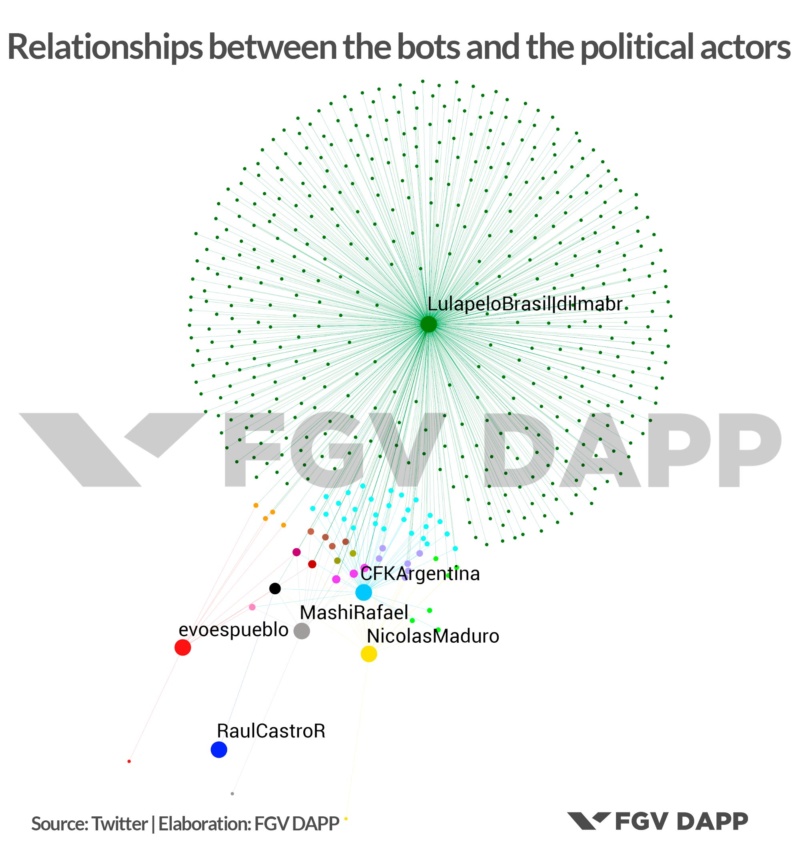