Despite his absence, Jair Bolsonaro was the most mentioned presidential hopeful in discussions on Twitter during the transmission; Present for the first time in a presidential debate, Haddad had 24% of the mentions associated with Lula

The presidential debate hosted at TV Aparecida on Thursday (20) prompted 387,598 publications on Twitter about the presidential hopefuls between Wednesday (20) at 9 p.m. and Friday (21) at 1 a.m. The repercussion was significantly lower than that of the debate hosted by Band (August 9), when there were 1.59 million publications on Twitter in three hours.

Despite not participating in the transmission due to his hospitalization, Jair Bolsonaro was the presidential hopeful mentioned the most in the discussions (168.6 thousand mentions), and the subject of the most retweeted publications in the period. Fernando Haddad, who was in a debate for the first time in these elections, was the second most mentioned, with 58.8 thousand references.

Besides Haddad, the other candidates participating in the debate were Alvaro Dias (Podemos), Ciro Gomes (PDT), Geraldo Alckmin (PSDB), Guilherme Boulos (PSOL), Henrique Meirelles (MDB) and Marina Silva (Rede). Cabo Daciolo claimed he had scheduling issues and did not participate.

Mentions to the candidates 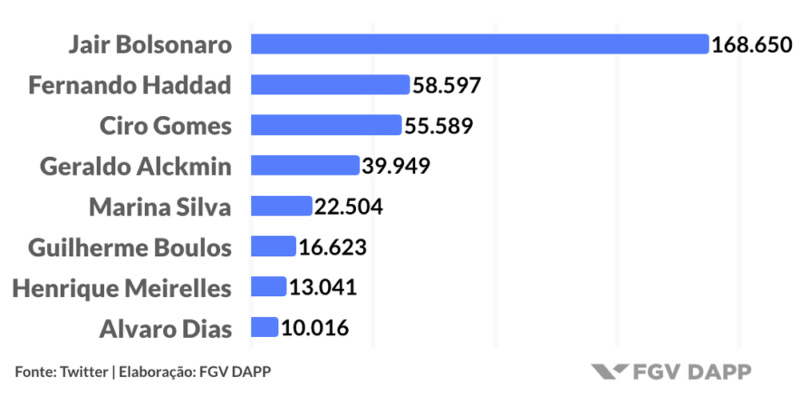 The main discussions around Bolsonaro commented investigations by the Federal Police regarding the knife attack against him on September 6. Other mentions talked about the rally given by his son Eduardo Bolsonaro.

Haddad had around 24% of his mentions associated with Lula, with praise from supporters and criticism from opposers, associating social problems with left-wing governments.