From the World Cup to democracy, the Brazilian people’s frustrations have a thousand faces on Twitter

The Brazilian people’s frustrations already seen regarding politics – electoral polls indicated that blank, null and undecided votes have reached 34% – and the economy – according to the IBGE, the country already has 4.6 million people who have given up looking for a job – are also evitdent on the social networks. Data collection by FGV DAPP shows that, between June 1 and 13, more than 484 thousand retweets expressed disappointment, distrust, resignation and dissatisfaction with various institutional spheres and public policies,

namely: the political system, the political class, democracy, public security, public education, labor unions, armed forces, the Judiciary Branch, the economy and public service. Therefore, the posts returned to their sentiments of criticizing, giving up or rejecting these institutions, manifesting their frustrations with the country’s situation.

Each group (cluster) in a color represents the percentage of profiles who interact from a common network of retweets.

Map of interactions about the Brazilian people’s frustrations
484.837 retweets 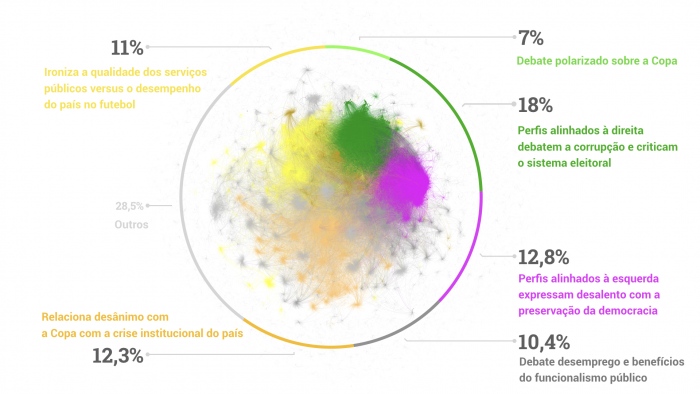 10.4% (grey): debating unemployment and the benefits given to public servants

12.8% (pink): profiles aligned with the left wing express frustration about the preservation of democracy

18% (green): profiles aligned with the right wing debate about corruption and criticize the electoral system