Interview with Bolsonaro causes more than 60,000 tweets per hour

Driven by the arguing conducted by the TV program “Roda Viva”, the debate on the congressman and presidential hopeful Jair Bolsonaro mobilized 717,308 posts on Twitter between Monday (30) 8 pm and Tuesday (31) 8 am, around 60,000 tweets per hour. The volume registered in 12 hours is equivalent to approximately 65% of the mentions on the presidential hopefuls computed in the preceding seven days (from July 23 to 29). The peak of references occurred around 11 pm, when approximately 40% of mentions and an average of 4.6 billion tweets per minute were registered.

Among the most used hashtags, #bolsonaronorodaviva was present in 33% of mentions, and part of them tends to criticize journalists. #Rodaviva was cited in 27% of the posts and criticized the presidential hopeful.

Interactions motivated by Jair Bolsonaro’s interview in Roda Viva created two main discussion groups with opposing positions in the debate. The largest one, in orange in the map, gathered more than 54.2% of the accounts in interaction and comprised profiles against the congressman. The second largest group, in green, has about 26% of the profiles and supports Bolsonaro. Two smaller groups (in pink and gray) were also identified, each with almost 5% of the profiles each. The presence of bots was not significant in the analysis.

Map of interactions over Jair Bolsonaro on Twitter – from July 30 8 pm to July 31 8 am. 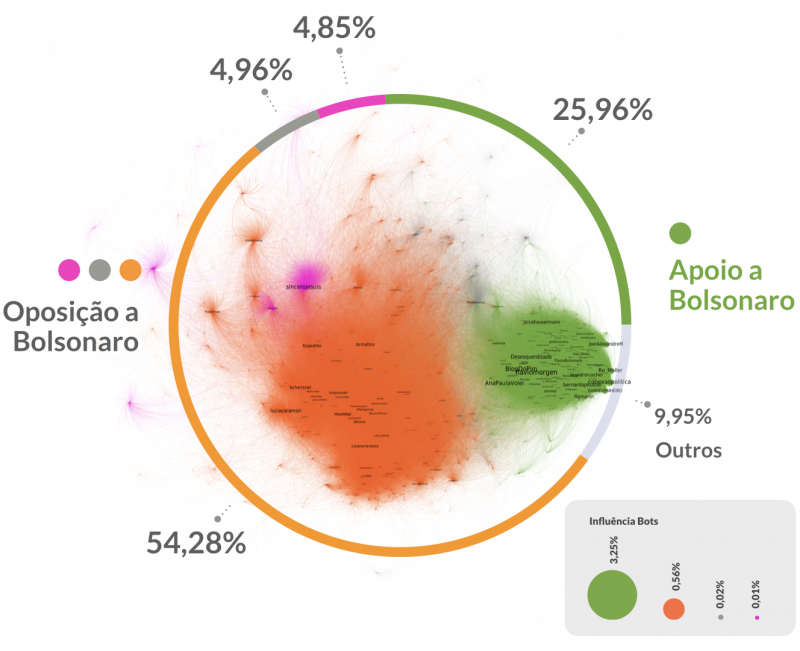 The orange group is less cohesive than the green one and presents heterogeneous profiles. In general, the orange group strongly criticizes the congressman due to his positions, considered discriminatory by users. Consequently, he was strongly criticized for his exaltation of dictatorship. The most shared tweet in the group mocks Bolsonaro’s speech in which he said the Portuguese “didn’t even step foot in Africa”. The second most relevant tweet was the first of a sequence of messages created by a writer and advertising man that gives tips on how to defeat Bolsonaro in the 2018 elections. Many posts in the group also ironized the knowledge of the congressman and said he should not run for president, but study for Enem (Brazilian National High School Exam), given its supposed lack of general knowledge.

The green group, in turn, supports Bolsonaro and comprises mostly profiles aligned with the right wing. The group exalts the congressman’s performance in the debate and direct criticism to the interviewers of the TV program – they particularly mention the speech of an interviewer about printed vote and another who cited Wikipedia as source of information. Users also defend the presidential hopeful’s positions concerning minorities and ironized those who seek less authoritarian solutions for security. Part of this group’s posts also supports Bolsonaro for opposing the left wing in Brazil.

In a smaller proportion, the gray group is worried about how journalism has approached Bolsonaro, which, according to users, could culminate in the election of the presidential hopeful. In the group’s main tweet, an user complains about the emphasis of questions on Bolsonaro’s controversies, and not on his proposals, which would press the hopeful. He can answer about polemics, but he cannot properly talk about the future. The pink group is opposed to Bolsonaro similarly to the orange group, but in a debate mainly conducted by the profile @sincerojesuis, who makes funny posts against Bolsonaro.