With this volume, this event had the highest immediate repercussion on Twitter since the 2014 elections, according to FGV DAPP’s method; the largest interacting group questioned the veracity of the attack

As the Brazilian event with the highest repercussion on Twitter since the 2014 elections, the attack on Jair Bolsonaro in Juiz de Fora (MG) developed multiple shapes of thematic discussions and concentrated almost the whole political debate on the networks. From Thursday 3pm (6) to this Friday (7) 10am, FGV DAPP identified 3.2 million references to the attack concerning the medical procedures that Bolsonaro underwent, expressions of sympathy, references to the violence and hate speech in the democratic process and strong engagement regarding the veracity of the event, which represented most of interactions until Thursday night.

The peak of mentions of the discussion, which amounted to 1.4 million references on Twitter until 8pm this Thursday, was at around  4:40pm, just after the publication of the attack, with an average of 11.8 thousand posts per minute on Twitter Outside Brazil, there have been 48.4 thousand tweets in English about the attack on Bolsonaro, mainly from the United States (14 thousand). In Spanish, there have been 91.9 thousand tweets, mainly from Argentina (21.1 thousand) and Venezuela (16.5 thousand).

Evolution of mentions on Twitter on the attack against Bolsonaro
4pm Sep, 6 – 10am Sep, 7 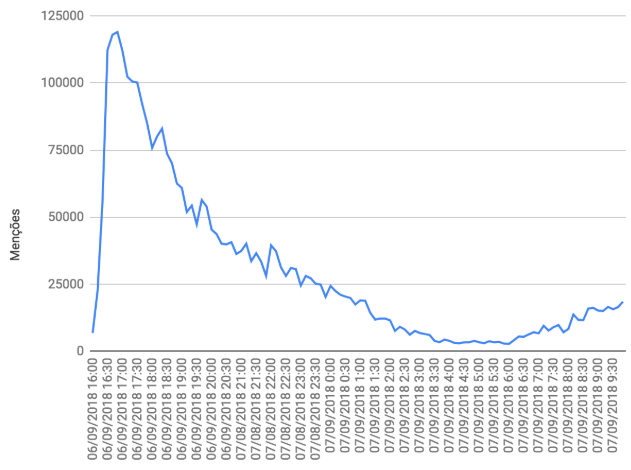