Alckmin is the presidential hopeful most associated with the reform for being favorable to the end of the compulsory tax; Bolsonaro is the second name with the largest volume of references

Among all modifications made by the Labor Reform, two of them arise as the most important issues in the electoral situation and proposals of the presidential hopefuls: the end of the labor union tax and the fact that the easing of rules provided in the Labor Code, unlike predicted by the federal government, did not result in the resumption of job creation in the country.  Both issues were present in the first TV debate with presidential hopefuls on Band (Aug 9).

From July 23 to August 13, there were 87,376 references on Twitter to the reform and related topics. The labor union tax, within this frame, accounted for 21,713 posts (24.8%), mainly in association with Geraldo Alckmin.  The candidate was quoted in 8,455 posts after adopting a favorable positioning concerning the end of the mandatory tax – at the end of July there was strong engagement in social networks due to the position adopted in PSDB’s campaign.  This debate added some criticism to those who suggested restoring the contribution, not only due to the high tax burden in Brazil, but also due to the advantages of maintaining labor unions — which should, according to this point of view, be kept only with their own funds. 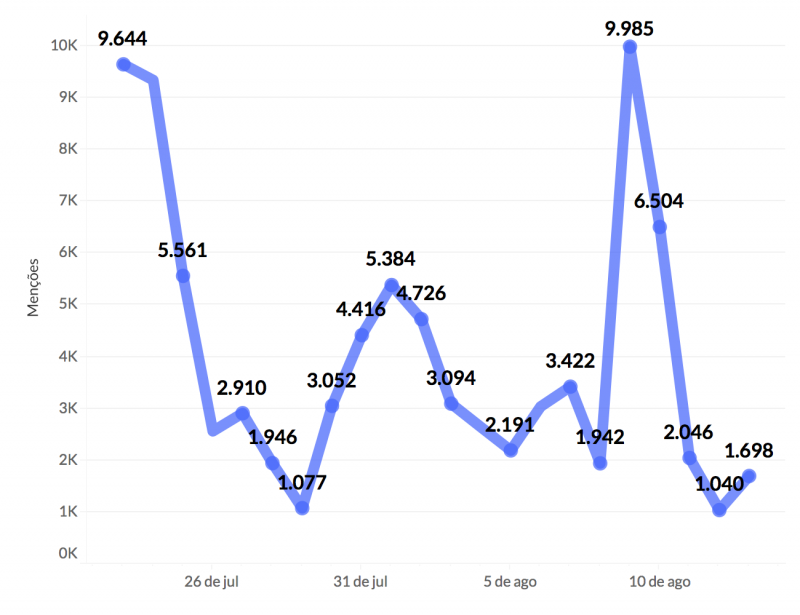