The elections have been the target of various narrative disputes, and one of the main topics is a suspicion of fraud in the voting results. Some episodes were key in prompting this debate, such as the suspension of the implementation of the printed vote system by the Federal Supreme Court on June 6 and the denial of former president Lula’s candidacy. A recently-published video by candidate Jair Bolsonaro on his Facebook, in which he speaks about the possibility of fraud in the elections articulated by the Worker’s Party, prompted reactions about the reliability of the electoral process. The video generated more than 470 thousand comments until 1 p.m. this Tuesday on Facebook only. 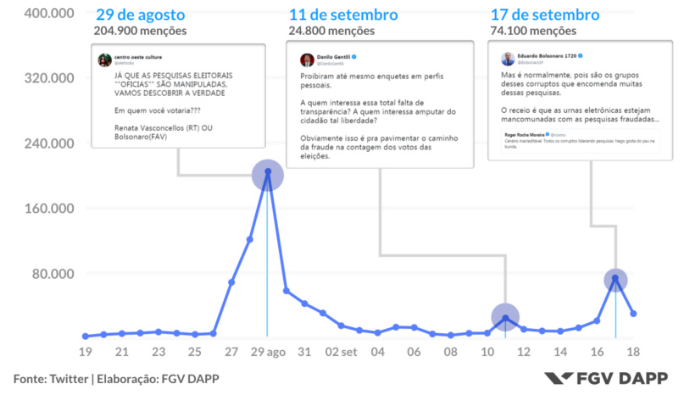 – Since the “official” polls are manipulated, let’s find out the truth. Who would you vote for???

– They even prohibited polls in personal profiles. Who does this complete lack of transparency serve? Who benefits from depriving citizens of this freedom? This is obviously intended to pave the way for fraud in the election vote counting.

– But it’s normal because many of these polls are requested by these groups of corrupt politicians. We fear that the voting machines are accomplices of the fraudulent polls

In one month, from August 19 to September 18, the lack of trust in the elections prompted 841,800 mentions on Twitter.