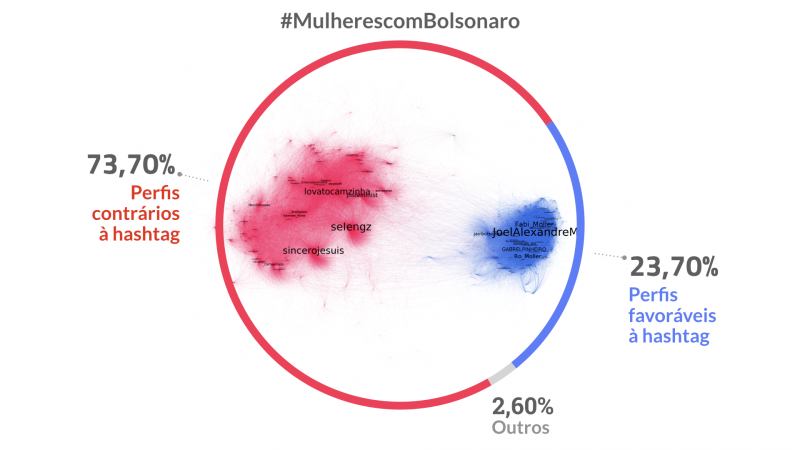 Although smaller in number of accounts, the group pro #MulherescomBolsonaro (in blue in the map of interactions) produced the greatest volume of posts, occupying 58.5% of the debate (122,786 tweets). In this group, one of the most retweeted posts was the official profile of Jair Bolsonaro (PSL), who thanked the support and claimed that women are important to the development of Brazil. The third most retweeted post is the profile of his son, Carlos Bolsonaro. In his opinion, the fact that the hashtag was on the first place would put in check the construction of the image of his father as a character contrary to women.

Posts defending a “right-wing feminism” (or criticizing a “left-wing feminism”) and approaching conservative agendas linked to the presidential hopeful stood out, including themes such as the defense of the “traditional family”, the demand for strict measures to combat violence and the so-called “gender ideology”. 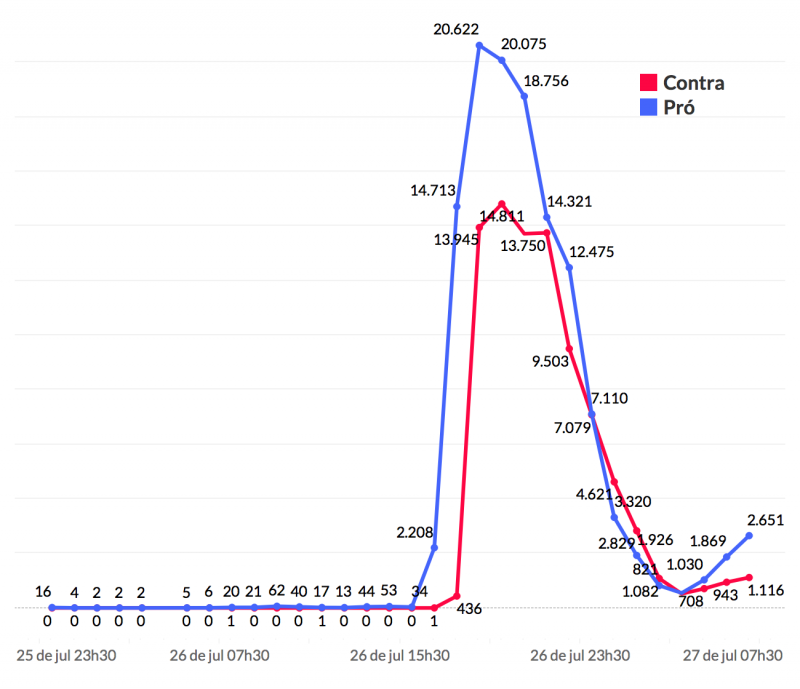 The group that criticized the hashtag (red), though more expressive in number of users, was less active in the debate, with 85,063 tweets, 40.55% of the total in the 32 hours studied. Here, the tone of the posts is more ironic, approaching the manifestation of female support to presidential hopeful with humor. The tweets with the greatest impact in this group also shared news links on Bolsonaro’s statements considered contrary to women, questioning if the advocates of the hashtag have forgotten such his words.

The analysis undertaken by FGV DAPP did not identify a significant presence of bots in the general debate on the hashtag.

The diffusion of #MulherescomBolsonaro also boosted #MulheresContraBolsonaro, which mobilized about 48,000 tweets in the period analyzed. Among the most retweeted publications are, again, mentions to Bolsonaro’s controversial speeches, as, for example, addressing the presence of women in the labor market. Due to these statements, users have accused the presidential hopeful and his supporters of sexism.