Debates on national themes with broad repercussion on social networks have provoked an intriguing phenomenon to Brazilian users: the presence of hashtags on national topics in the Trending Topics (TTs) of countries that apparently are not linked to the discussion. The suspicion raised by internet users is that debates would have had the interference of bots, which would be used to prompt such themes. However, an analysis FGV DAPP indicates that there were not automated interferences – neither internal nor external – determining the Trending Topics.

One of the focuses of debate last week – and of doubts on bots prompting some TTs – was the mobilization on social networks about the decriminalization of abortion until the 12th week of pregnancy, motivated by a public hearing in the Federal Supreme Court on the matter.

In order to verify the hypothesis of illegitimate interferences, FGV DAPP first analyzed 1,120,493 tweets, posted by 348,731 accounts in three major groups of discussion that was formed on the theme. Among these accounts, only 631 (0.18%) were classified as automated based on the methodology DAPP, either for posting in less than a second at least twice during the period analyzed, or for using automating platforms to produce their tweets – both parameters are the ones used by the FGV DAPP to identify bots.

In the blue group, comprising profiles against the decriminalization, 228 automated accounts were responsible for 3% of interactions. In the red group, favorable to the decriminalization, 246 automated profiles generated only 0.17% of the interactions in this group, which clearly shows that bots in the blue group (against the legalization of abortion) were more active in the debate.

Map of interactions on Twitter about decriminalization of abortion 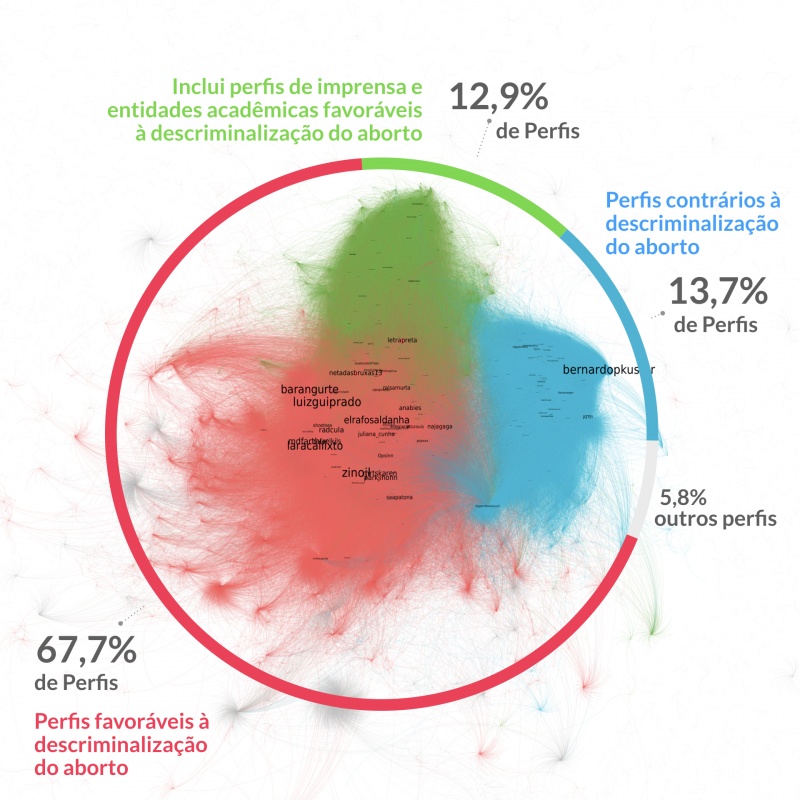 Such proportions have little significance before the volume of the organic debate that occurred on networks. However, with the suspicion raised by users that bots outside Brazil would be promoting Trending Topics related to the discussion on abortion, we also analyzed the location of accounts that participated in this debate. Among the 624,947 tweets collected with location information, 528,984 (84.6%) were identified in Brazil. But other locations did seem suspicious, such as Bosnia, which would have originated 14,241 tweets, Saint Vincent and the Grenadines (6,827 tweets), and São Tomé and Príncipe (2,131).

However, most of accounts directly informing their location in the profile as from Bosnia, for example, actually had Brazilian expressions such as “Na Sua” (Into you) and “Na PQP” (Fucking far away) in the field for location. The same happened with Saint Vincent and the Grenadines: most of accounts that produced tweets with location information from this country actually registered “Lixo” (rubbish) and “Inferno” (hell) in the location information of their profiles. This process repeated even to São Tomé and Príncipe, with the terms “São Januário” and “São Gonçalo”. 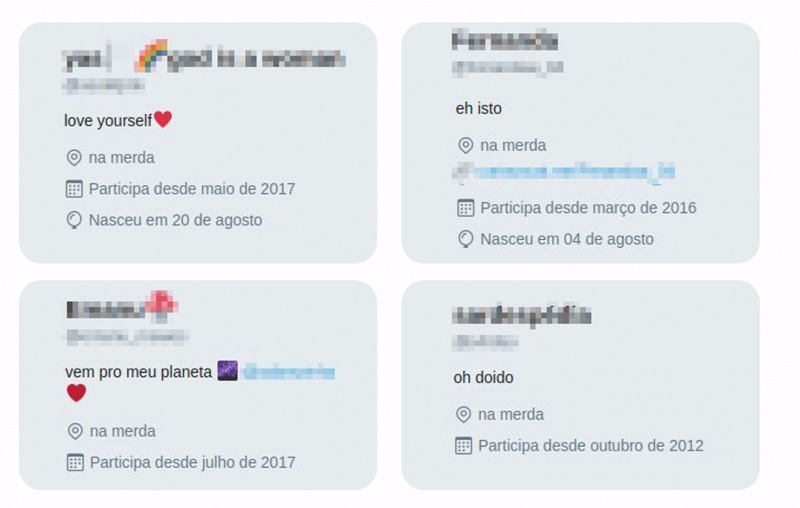 When questioned about this possible inconsistence in the classification, Gnip, which provides data from the platform Twitter, stated that the location informed by users helps to estimate the geographical location of the account. Mos of times this estimate produces correct results, and, residually, there are inconsistencies, such as in the examples presented here. Gnip informed that this method does not have any interference in the classification of georeferenced Trending Topics.

This information, however, is not enough to dismiss the possible use of accounts located abroad, automated or not, influencing the national debate, and the suspicion raised by foreign Trending Topics cannot be invalidated yet.

The dynamics of the TTs 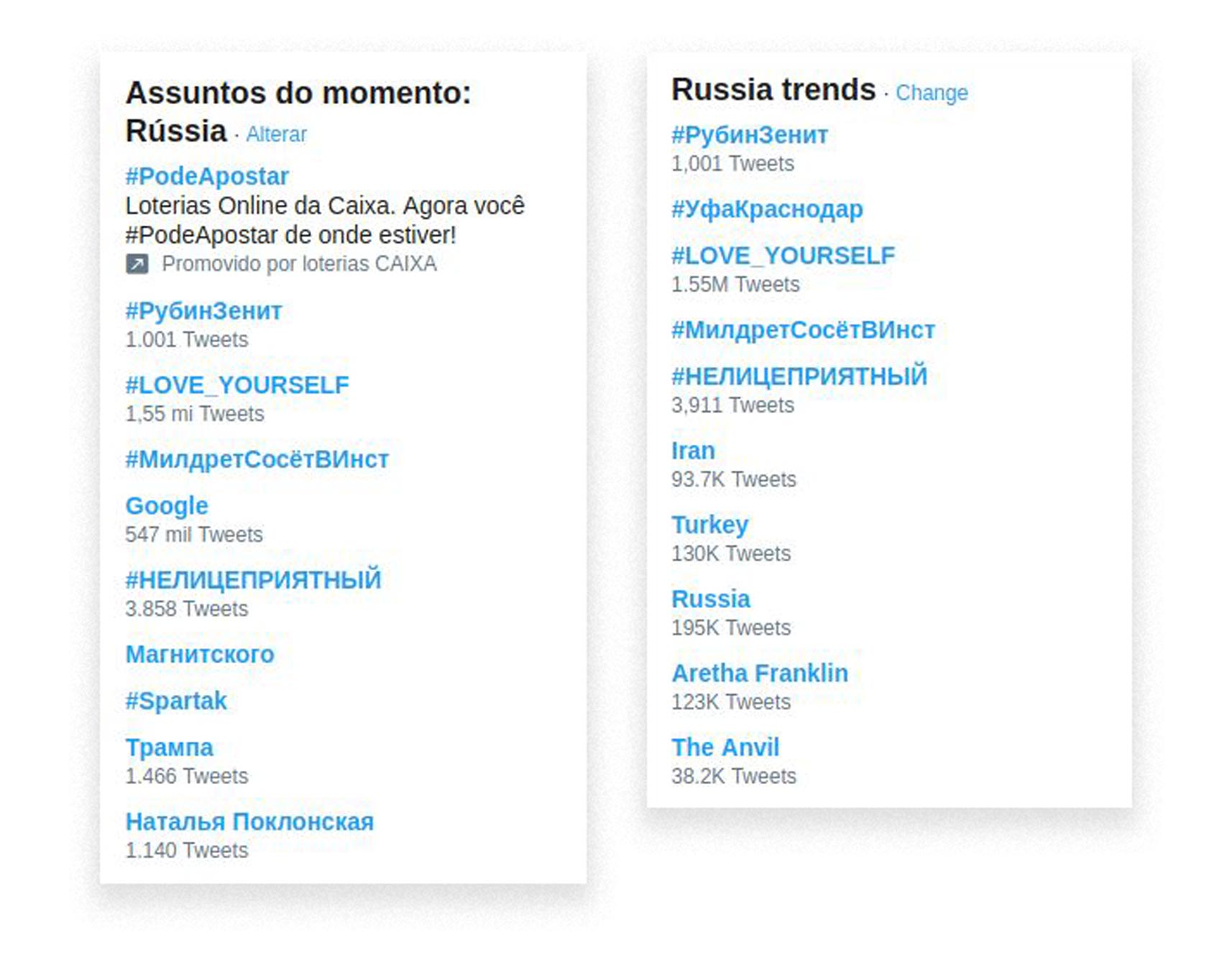 In their website, Twitter states that the terms of the Trending Topics are determined by an algorithm, and, by default, they are customized for the user based on profiles they follow, their interests and their location. Besides, the algorithm identifies popular topics nowadays, and not highly used terms throughout the day, for example.

In response to the press about the recent cases, the platform also stated “it is possible that the accelerated use of hashtags during a concentrated period has led the algorithm to understand that the subjects related would be of interest in other countries (some hashtags usually appear in other languages in the Trending Topics in Brazil, for example). Besides, the listing of hashtags among Trends in the countries mentioned can have being motivated by the smaller total volume of conversations on Twitter in their markets, which makes the presence of foreign hashtags in their Trending Topics more usual.”

No records in the countries

To finish the investigation, we conducted a historical search of Gnip for tweets created between August 1 and 8 mentioning #AbortoÉCrime (abortion is a crime) in Ukraine, Vietnam, Belarus, Norway, and Switzerland, which were reported by users as places where the hashtag would have appeared in the Trending Topics. The search did not find any results, it means, no publication with the hashtag was made in these countries.

Therefore, by checking the personalization of the results of the Trending Topics and the apparent absence of publications with the hashtag #AbortoÉCrime in the countries where the Trending Topics were observed, we can conclude that the mere presence of a hashtag related to the national political debate in foreign Trending Topics is not conclusive concerning any external interference, either by bots or not. It is worth mentioning that the verification of automation must always comply with technical criteria checking and comprehensive review of the results.

The Digital Democracy Room is an initiative without any political or party bonding, lead by the Department of Public Policy Analysis of Fundação Getulio Vargas (FGV DAPP), which aims to provide an analysis of the Brazilian political scene based on the public debate on social networks.

Our analyses do not intend to represent an election poll, but evaluate the social perception in the digital environment regarding the themes of the public agenda, such as political actors and public policies. Therefore, we do not authorize the use of our analysis for political or party purposes or to endorse particular positions. Further information regarding this work can be accessed at dapp.fgv.br/observa2018/metodologia.