The campaign in the second round of the presidential elections has consolidated YouTube as a place for political clashes. In one week, from October 8 to 15, we identified 991 videos about the candidates in the race, Fernando Haddad and Jair Bolsonaro. That volume is higher than that registered in the three previous months together (from July 4 to October 7), when 939 videos were shared. The publications, which had varied content, format and target audience, generated 118 million views and had Jair Bolsonaro as the protagonist; he was present in 63% of the views.

Views per candidate according to feeling 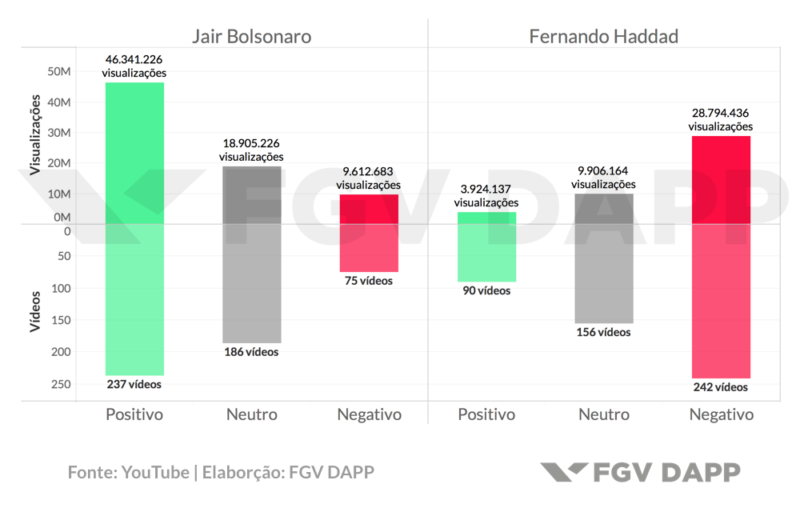 There were 498 videos with references to Bolsonaro, most of them (48%) with positive comments about his performance in interviews and/or debates, as well as support for his candidacy in the second round. The negative videos (15%) criticize Bolsonaro’s behavior and the agendas he defends.

Regarding Fernando Haddad, there were 488 videos mentioning his name directly, often with a critical tone (50%). The negative videos dismantle the proposals and personality of Haddad and his vice president, Manuela D’Ávila, also talking about PT, communism and anti-christianism as negative aspects.

Positive mentions (18%) defend him against supposed fake news, demonstrate support for the maintenance of democracy and show fragments of the party’s TV program and the campaign jingles.