Argentina, with 416.2 thousand tweets, had the largest debate, followed by Portugal (196.7 thousand) and Venezuela (186.6 thousand)

The presidential election in Brazil this year has attracted significant international repercussion. Since the first round, entities and celebrities have been using the social networks to express their opinions, and the foreign press has been closely following the dispute between Jair Bolsonaro and Fernando Haddad. The specific circumstances of the current dispute, with Lula in prison and Bolsonaro as the favorite, as well as the political and economic repercussions of his potential win, have attracted attention and curiosity and engaged polarized opinions, similarly to what we see now with Brazilian electors. 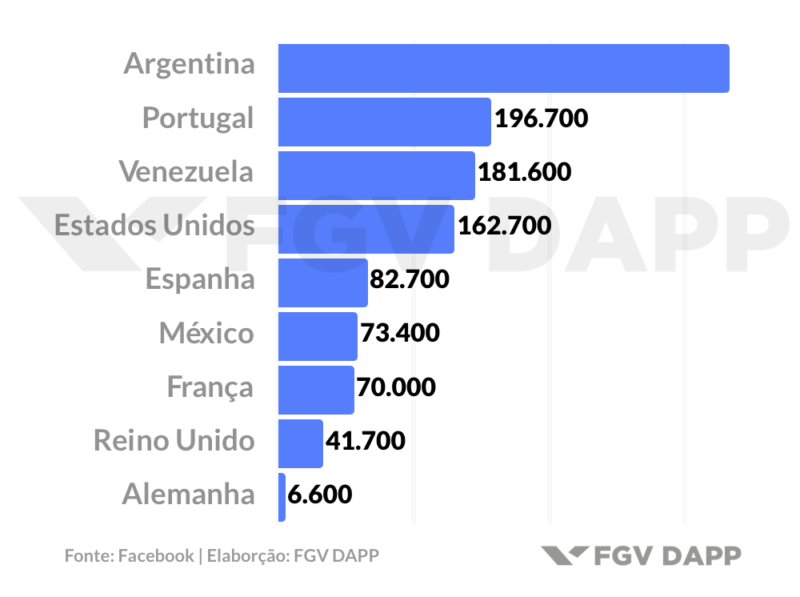 FGV DAPP has identified, from September 17 to October 16, 1.2 million mentions about the Brazilian presidential election coming from Argentina, Venezuela, Mexico, Spain, France, the United States, Portugal and the United Kingdom – filtering the debate by the respective official languages from each country. The Argentinians were the most involved in the election among the countries we selected for this study: there were 416.2 thousand references to the Brazilian political context in the period analyzed. They were followed by the Portuguese (196.7 thousand tweets) and Venezuelans (186.6 thousand).

Even before the 1st round, we had already identified a strong concentration of mentions about Bolsonaro and Lula, later represented by Haddad. Bolsonaro was mentioned in 35% of the posts about Brazilian politics identified in the USA (57 thousand tweets out of a total of 162.7 thousand), and the main subtopic of debate was the opposition between democracy and totalitarianism.