Debate prompts criticism of the TSE and the STF for not applying the measure in the 2018 elections; Bolsonaro and his sons propelled 7% of the debate

Debates about the use of printed vote at the ballots prompted more than 230 thousand tweets between February 22 and June 15 this year, mobilizing around 30 thousand users of the social network. The measure was established by the electoral mini reform of 2015 (law 13,165/2915), which passed with difficulty by the Congress, and returned to the discussion at the end of 2017 due to the upcoming elections. In the same period, the Bolsa Família – usually the object of controversy between critics and supporters – prompted half that volume: 122 thousand mentions.

In this period, the debate had a significant association with the supporters of federal deputy Jair Bolsonaro. The Bolsonaro family alone is directly responsible for mobilizing 7% of the retweets about the theme, which corresponds to 10,454 retweets of publications by Jair Bolsonaro and his three sons. Among comments about the family are statements that the decisions by the TSE and the STF were supposedly deliberately trying to prevent his victory in the elections.

The discussion was concentrated on two moments, both with strong mobilization of users supporting the printed vote measure. At first, the Superior Electoral Court (TSE) determined, in March, 2018, that 5% of the country’s ballots would print the votes.

Evolution of the debate on Twitter about the printed vote 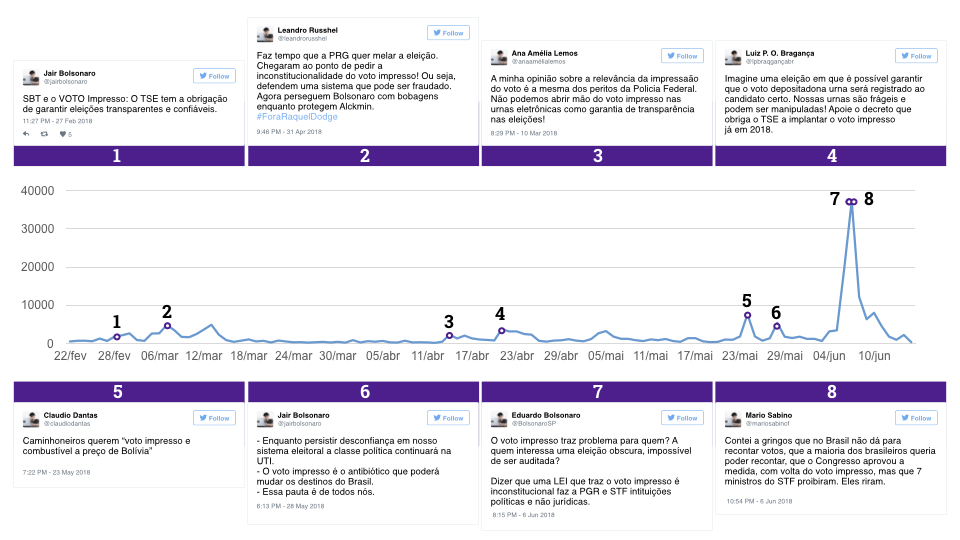