The debate of the economic agenda on the social networks shows a growing trend of association with the elections as the discussions about the impacts of the truck drivers’ strike start to cool down. Last week, many presidential hopefuls were in focus due to economic issues that caused considerable critical repercussion on Twitter, news websites and blogs. 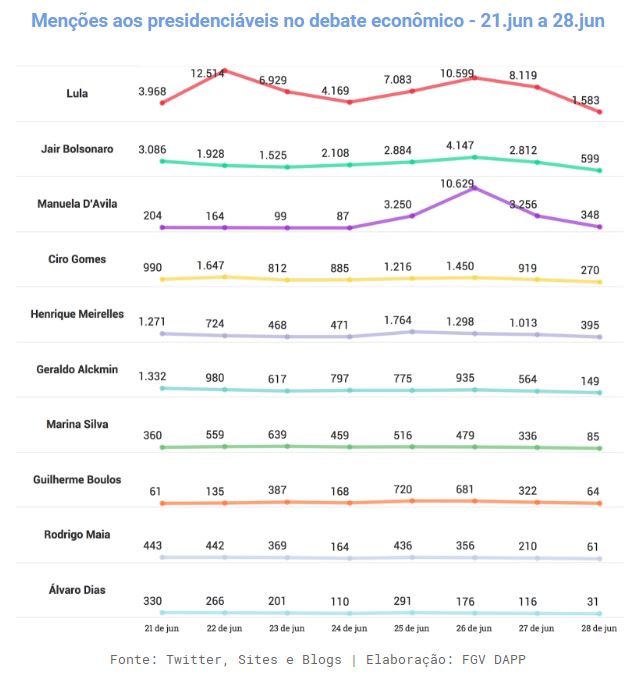 Mentions of the presidential hopefuls in the economic debate

Presidential hopeful Manuela D’Ávila was especially highlighted due to her participation in the question-and-answer session “Roda Vida”. While the networks showed support for the defense of civil rights by the presidential hopeful, the economic themes mobilized more diffuse perceptions, often criticizing Manuela. The comments especially mentioned her positions regarding the revocation of the Labor Reform and her acknowledgment of a democratic regime in Venezuela. Some profiles also stated that Marina uses information considered inaccurate or unclear when she talks about the economy.

The release of a Datafolha survey at the end of last week showing that almost one third of the population believes that former president Lula is the most prepared candidate to accelerate economic growth also prompted criticism on the networks. The comments especially highlight the fact that Lula is imprisoned. Meanwhile, federal deputy Jair Bolsonaro’s positions were seen by users as contradictory, considering his signals for a more liberal policy in the economic field.