Reaction to rumors overpowered dissemination of fake news against Marielle

A data collection by the Department of Public Policy Analysis of Fundação Getulio Vargas (FGV DAPP) showed that the repercussion of the death of city council member Marielle Franco prompted 2.14 million mentions on Twitter between Wednesday (03/14, the day of the crime) until Sunday (03/18) at midnight was marked by three great “waves” on the social network. In the first 36h after the assassination, the debate was focused on the event itself and was marked by feelings of shock, consternation and indignation – besides a minority of around 7%, who criticized the council member. This Friday in the morning, fake news started to spread about supposed connections between Marielle and drug trafficking, which “went viral” in the end of the afternoon through a tweet by deputy Alberto Fraga. This second moment went on for around 24h until Saturday afternoon, and was marked by slander against Marielle.

The third moment was marked by the wave of denial of the fake news, which was able to stop the rumors connected to the council member and reach a peak of mentions around 7 p.m. on Saturday, accounting for almost double the amount of tweets spreading fake news. In that sense, the third wave aimed to contain the spread of fake news and set the tone of the debate until the end of the day on Sunday.

One of the first tweets with a fake piece of news about Marielle identified by FGV DAPP happened on Friday at 10:45 a.m. One user shared a video whose images were nor related to Marielle, but which related “shirtless boys wearing flip flops” to the Comando Vermelho and stating the Marielle was the former wife of drug dealer Marcinho VP.

Battle of narratives
The wake of fake news (in blue) started on Friday and went on through Saturday, but was contained by the wave of denial (in red), which was able to stop the spread of fake content. 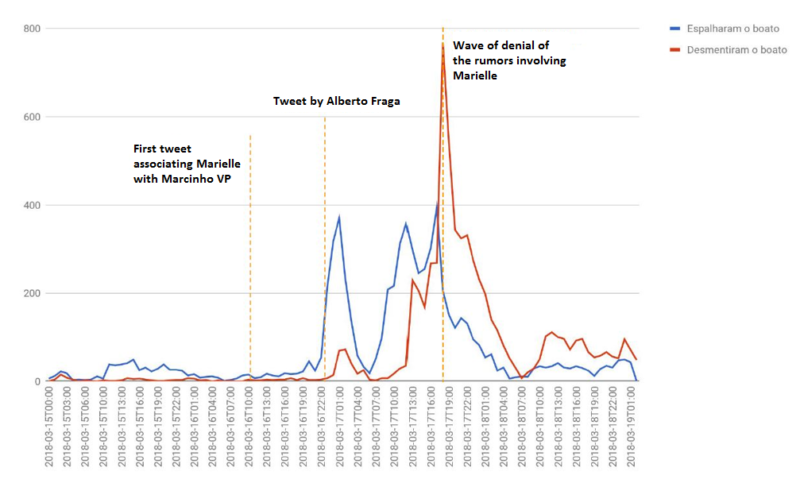 Therefore, the analysis by FGV DAPP demonstrated the success of a collective act involving millions of people to “contain” the slander campaign through the denial of fake news which were being spread since Friday.

Analysis of the Spread of Fake News – Marielle Case 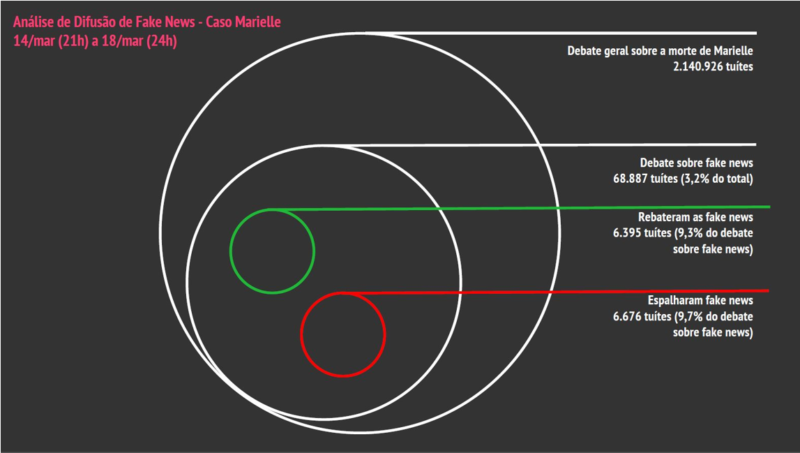 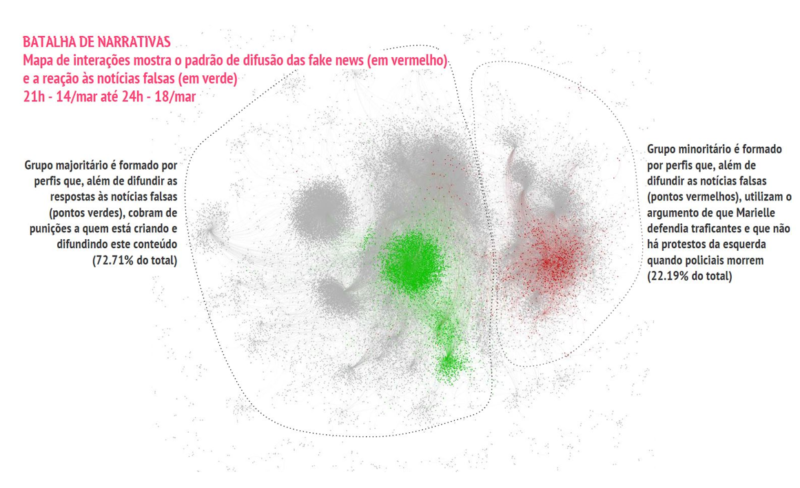 The largest group is formed by profiles which, in addition to spreading responses to the fake news (green dots), also demanded punishment for those who created and spread this content (72.21% of the total)

The smaller group is formed by profiles which, in addition to spreading fake news (red dots), also argued that Marielle defended drug dealers and that there are no left-wing demonstrations when police officers die (22.19% of the total)

Death of Marielle mobilizes over 1.16 million mentions on Twitter