Economic debate on the networks reflects intensification of the polarization

In 2014, the debate mainly served as a thermometer for the perception of Brazilians about public expenditures with the World Cup; in 2018, the debate is market by the polarization between the left and right wings

Four years ago, when the official presidential campaign was about to start, the economic debate on the social networks was almost completely focused on a topic that has always been important for Brazilians, although not always from an economic point of view: soccer. The 2014 World Cup, hosted by Brazil during Dilma Rousseff’s administration, was used on the internet as a central element of different economic discussions, which precisely reflect the moment experienced by the country in the last electoral cycle – and how different Brazil’s economic agendas and topics are today, especially for the current presidential candidates.

In the map of interactions about the economic debate in the country, from June 15 to July 15, 2014, exactly the time the Word Cup was happening, the performance of the competitors (and of the Brazilian national team, which was eliminated by Germany) operated as a thermometer of the perception of Brazilians about the high public expenditures the government made for the competition, the tax burden, corruption and the provision of quality public services for health and education.  Unemployment, for instance, had not yet become a large economic subtheme on the social networks, neither had the reforms – which appeared as central agendas after the interruption of Dilma’s second mandate in 2016.

The “Cup element”, in fact, was more present in the main part of the debate on the graph (in pink), which accounted for 20.6% of the profiles participating in the discussion about the economy. Without demonstrating political support for any of the electoral programs in the pre-campaign period of 2014, Dilma, Aécio Neves or Educardo Campos – who later passed away in August 13 –, the group was dominated by jokes and satire about the large federal investment on stadiums (considering the lack of resources for hospitals and schools) e the use of taxpayers’ money to fund a sports competition. The “legacy” of the Cup – the promise of improvements on infrastructure, public security and other public services for the country – was seen as a failure by the profiles in the debate. They demonstrated happiness about the tournament, but made ironic comments about the fact that the government expenditures would not result in benefits for the population.

Figure 1. Map of retweets of the economic debate around the presidential hopefuls in 2014, Twitter – Jun 15 to Jul 15 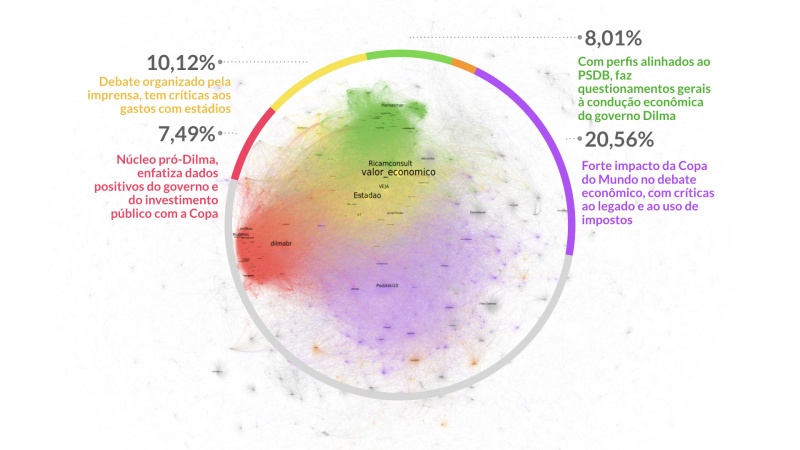 10.12% – Debate organized by the press with criticism of the expenditures on stadiums

7.49% – Pro-Dilma group emphasizing positive data regarding the government and public investments on the Cup

8.01% – With profiles aligned with the PSDB, this group questioned the conduction of the economy by the Dilma administration in general.

20.56% – Strong impact of the World Cup on the economic debate, with criticism of the legacy and of the use of taxpayers’ money

The second biggest group in the graph, the yellow group (10.12%) was organized around the traditional press, which held a higher relevance in the economic debate in 2014 than today. This group showed the biggest diversity of economic themes approached from specific events and agendas of that time, but with a larger emphasis on the “legacy of the Cup”, seen mainly with a negative perspective. The reports and posts highlighted the electoral promises broken regarding investments, the high cost of the competition, the delays in finishing public construction projects and the values spent on stadiums, predicting that many of them would become “while elephants”.

Notably, both the groups politically aligned with Aécio and Dilma were not prominent in the economic discussion – contrary to what happens today, with the online regions of influence of Lula and Jair Bolsonaro predominating over any other groups. With 8% of the profiles (in green), the group closer to the PSDB also discussed the economic impact of the Cup, with more explicit criticism of the PT administration. Public expenditures, the political use of the State (with social programs), the low rates of economic growth, the inflation and Petrobras are the main economic topics mentioned by the profiles, who emphasize the low return of the taxes paid to the government by the population. Many profiles also highlighted the Brazilian investments on countries such as Angola and Cuba, with the argument that it is simply a political strategy with no regard for positive results for the Brazilian economy.

On the other side, in the pro-Dilma group (in red with 7.49% of the profiles), users resorted to soccer as a representation of Brazil’s positive economic results, mostly coming from posts by the former president’s official account. The federal government emphasized the importance of improving the financial conditions of the country’s soccer teams and the competitiveness with the international scenario of the sport, also highlighting the strength of State-owned companies (particularly Petrobras), the investments on the internal Brazilian market and the creation of jobs during the PT administrations due to the Cup. The BRICS leadership was also positively mentioned as a symbol of repositioning Brazil as a global economic power, as well as data indicating the benefits of the tournament for the growth of the GDP in the end of 2014.

Figure 2. Map of retweets of the economic debate around the presidential hopefuls in 2018, Twitter – Jun 15 to Jul 15 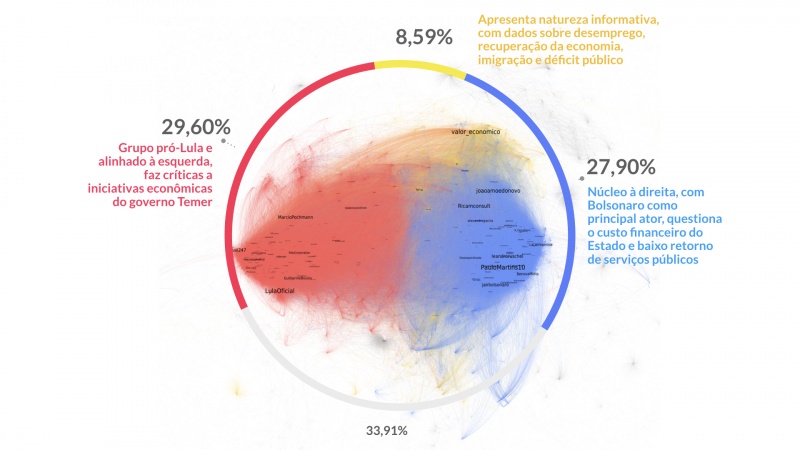 In contrast with the small presence of support groups for both actors with the most protagonism in the economic debate in the 2014 elections, this year the groups orbiting around profiles and influencers aligned with the PT and with Jair Bolsonaro account alone for 57.5% of all the accounts talking about economy on Twitter between June 15 and July 15. This demonstrates well the politization and polarization of general topics such as unemployment, taxes, reforms and government budget on the social networks, with both sides leading the conduction of important themes for the society.

Slightly bigger than the group closer to Bolsonaro (and, to a lesser extent, to other actors aligned with the left wing), the red group, which is pro-Lula and closer to names associated with the left wing, accounts for 29.6% of the profiles in the graph and focuses opinions from the opposition between the PT and Temer administrations and other platforms contrary to PT. Therefore, all big economic subthemes are debated with this perspective, with a highlight to the role (and size) of the State’s influence on the economy, social invesments, inequality and labor and social security rights. Under a strong electoral focus, articulating actors of PT, PCdoB, Psol and also PDT and PSB (although not as closely as the first three), the group focuses their attention less on specific issues of the current conjuncture, such as unemployment, the crisis and tax burden, emphasizing a more comprehensive “political project” that includes greater state investment, maintenance of strategic companies under Brazilian control, programs to fight poverty and social benefits.

On the other side, the group to the right and with Bolsonaro at the center (in blue with 29% of the profiles), the main topic of debate contrasts the structure of the state with the services it provides to society. That is, this group considers the political elite (seen as corrupt), the public servants, the tax burden and the bureaucracy the reasons for the crisis, poverty, poor services and, especially, unemployment. There is criticism of the size and costs of the Brazilian State, of the privileges of public servants and of common taxes, with the argument that privatization, reduction of government interference on the economy, and investment on public security are key to resolve several problems. Common economic issues such as inflation, exchange and interest are far from being the areas of greatest impact on the debate.

With 8.59% of profiles (in yellow), only one group mobilized by the traditional press operates contact between the two extremes – unlike 2014, little of the economic debate presents groups that are not associated with any party or without explicit political content. Mobilized by news portals and a few “middleman” influencers between the left and right wings, who criticize both sides, the group addresses specific data and information about the current Brazilian context, such as the creation of jobs, growth expectations, immigration and public deficit. More equivalent in terms of the thematic coverage presented in the other two groups, the main highlight is the tax issue, which is approached from many points of view: income tax, tax evasion, corruption, the cost of the State and public education.