Debate about Manuela, the most mentioned VP, is propelled by definition of the PT ticket and by discussion about the participation of women on politics

The composition of the presidential tickets became relevant in this year’s elections, particularly regarding the topics of the formation of alliances and signals to specific groups of electors. A data collection by FGV DAPP showed that the VP candidates of the tickets ranking the best in the voting intention polls prompted 826.4 thousand mentions on Twitter between September 11 and 20.

The data collection starts from the official launch of Fernando Haddad’s candidacy – the moment when Manuela D’Ávila also became part of the PT ticket.  The congresswoman was the VP candidate mentioned the most in the tweets collected: there were 399 thousand references, which brought up feminism as a highlighted topic and associated her name with demands for higher participation of women on politics.

While Manuela was praised, Ciro Gomes’ decision to choose Kátia Abreu as his VP was seen negatively by some sectors of the left wing. The VP candidate for the PDT ticket – who was the third one mentioned the most in the period (77.6 thousand) – was critically associated with themes such as agribusiness, deforestation and conflicts with indigenous peoples.

In second place, with 339.4 thousand references, general Hamilton Mourão, of Jair Bolsonaro’s ticket, was mostly criticized due to a statement in which he associated raising children in homes without male figures as the cause for young people to become criminals.

Evolution of mentions to the VP candidates 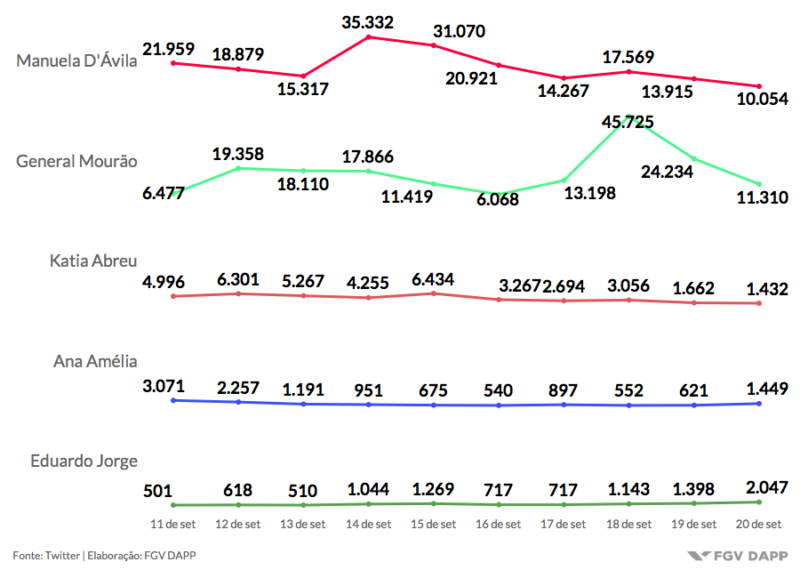