While references to Bolsonaro were prompted especially by the movements #elenão (not him) and #elesim (yes him), the discussion about Haddad was affected by the release of Palocci’s state evidence with accusations of corruption by the PT

With the approach of the 1st round and the demonstrations at the weekend, mentions to Jair Bolsonaro grew on Twitter, maintaining a daily volume of more than 1 million since Friday (28). Last week (between September 25 and October 1st), the PSL candidate was the presidential hopeful mentioned the most on the social network, with 9.2 million references. This volume is more than six times higher than that of the second most mentioned candidate, Fernando Haddad, who had around 1.5 million references.

The discussions about the two presidential hopefuls, however, were driven by the polarization that they represent in these elections. While the references to Bolsonaro were especially prompted by the movements #elenão and #elesim, the discussion about Haddad was affected by the release of Palocci’s state evidence with accusations of corruption by the PT. 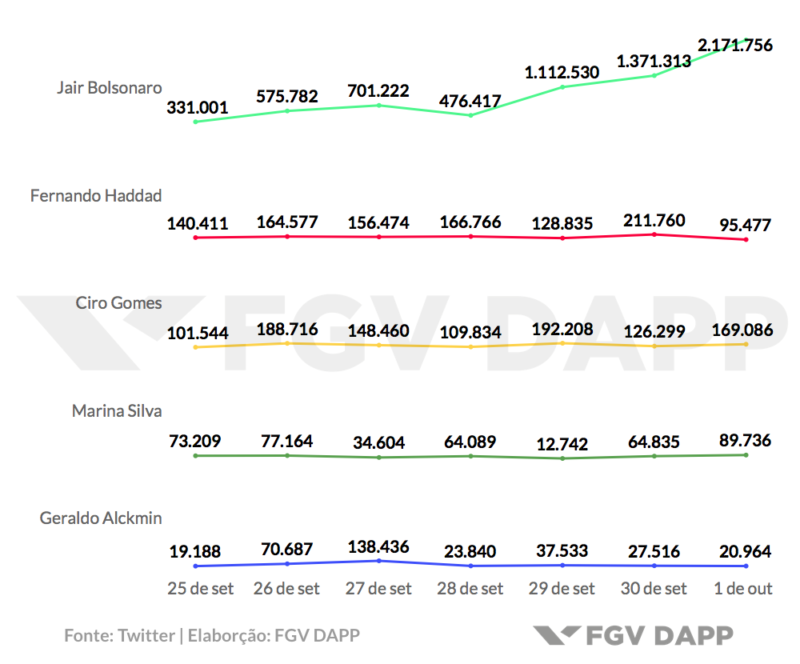 This polarization between users opposed to Bolsonaro and users opposed to the PT also led to the mobilization of mentions to Ciro Gomes (1.2 million) and Geraldo Alckmin (489 thousand). The PDT candidate is often mentioned as an option for a “non-polarized” vote, while Alckmin is criticized by users who would like to vote for the PSDB, but do not see him as a viable option.